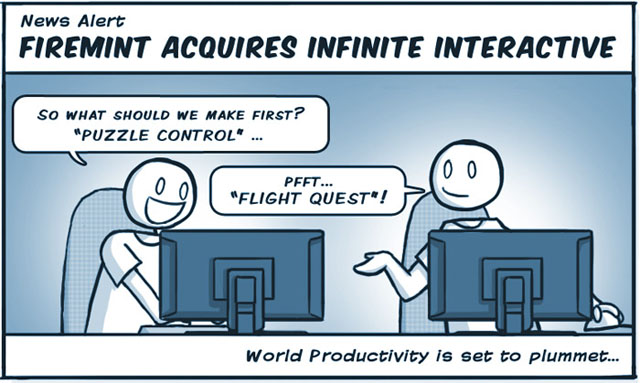 Two of Australia’s most well-known niche video gaming studios are set to merge their operations, with the acquisition of Infinite Interactive by fellow Melbourne development house Firemint.

The pair have shot to global prominence over the past few years through several popular in-house developed games. For Firemint it was Flight Control, a game initially for Apple’s iPhone platform which sees players guide planes to safe landing at airports, while Infinite Interactive is best known for its Puzzle Quest series. However both studios also have other notches on their belt.

In a statement, Firemint noted that Infinite Interactive founder Steve Fawkner and his team would join Firemint’s studio in Melbourne, which currently has 60 staff, and continue to work on a game already under development. Firemint described Fawkner as “one of the games industry’s pre-eminent innovators”, having created more than 30 games in a career spanning more than 25 years.

“I’m incredibly pleased to welcome Steve and his team to Firemint,” said Firemint chief executive and founder Rob Murray. “Steve is an outstanding game designer and our two studios evolved very similar philosophies of developing addictive, fun and polished original games. By bringing our studios’ talents together, we will be able to create even more awesome games – and more of them.”

Fawkner said the new position would free him up to focus on game design, adding: “I can’t wait to get stuck into it!”

The acquisition has its roots back as early as 2003, when the two company founders first met. In 2006, Fawkner showed Murray an early version of Puzzle Quest, which had been prototyped over the developer’s Christmas Holiday.

“Steve and I have been talking about working together for a long time, and I remember him showing me an early version of Puzzle Quest,” said Murray. “This inspired me to make a game during my own holidays two years later, which was Flight Control – and now, another two years later, we’ve finally found a way to work together!”

Flight Control appears to have been highly lucrative for Firemint.

In January 2010, for example, the developer noted it had sold 2 million copies of its Flight Control app for Apple’s iOS platform — which costs $1.19. The game has appeared on a number of ‘top 100’ paid apps lists around the world, and has held the top spot in some countries, including Australia. Most of the sales at that stage (46 percent) had come from the US, with Australians contributing 8 percent of sales.

Infinite, too, appears to have achieved success over its life. For example, video game site GameSpot awarded its Puzzle Quest: Challenge of the Warlords game for Nintendo DS a score of 8.1, or “great”, when the game was released in 2007. The company’s Puzzle Quest 2 game has a metacritic.com score of 83/100 — an aggregation of many reviews — and sells for USD$9.99 on Valve’s Steam platform.