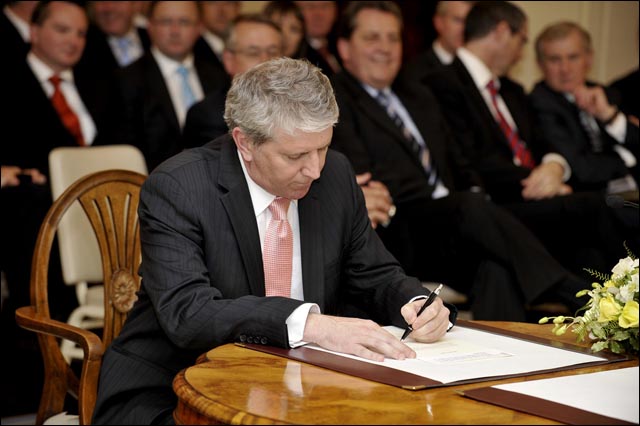 Julia Gillard’s Labor Federal Government today revealed it would support the introduction of an R18+ classification for video games at the upcoming meeting of state and federal attorneys-general on this Friday 10 December.

The Federal Attorney-General’s Department has been conducting an ongoing investigation by the Attorney-General’s Department into whether Australia needed an R18+ classification scheme for video games, with a report last week finding that current research into the effects of violent video games on aggression levels of those who play them was “contested and inconclusive”.

“We want to provide better guidance for parents and remove unsuitable material from children and teenagers. The introduction of an R18+ classification will help achieve that,” said Home Affairs and Justice Minister Brendan O’Connor (pictured, above) in a statement today.

“We believe that this is the right decision for Australian families and the right decision for parents who want to be able to make informed choices about the games their children play. “Children and teenagers shouldn’t be exposed to the gratuitous sex, violence and adult themes that are contained in some computer games.”

The Minister pointed out that there were dozens of games currently classified as MA15+ in Australia that were restricted to adults only in other countries. Labor believes if the new R18+ category was introduced, it would have the effect of protecting children from games which rightfully should be rated R18+.

Also today, O’Connor released the results of a national survey carried out by Galaxy, which found that 80 percent of Australians contacted — some 2,226 people — supported a R18+ rating for video games. Similar results were found in the Federal Government’s public consultation into the matter, which received some 57,000 responses, with 98 percent supporting the R18+ idea.

Dissenting voices
But not everyone is in favour of an R18+ rating for video games. In a statement today, the Australian Christian Lobby warned state attorneys-general not to be swayed by “pressure from the Commonwealth Government and the commercial interests of the computer gaming industry” on the matter. All of the states will need to agree with the Federal Government on the issue for it to move forward.

“Bureaucrats in the Attorney General’s Department have been too quick to dismiss credible academic literature which shows a link between violent interactive video games and aggressive behaviour,” said ACL managing director Jim Wallace.

“There is acknowledgement from both sides of politics that the classification system is broken and not serving the interests of parents and children so the idea of using it to legalise more offensive and potentially dangerous material makes no sense.”

Wallace claimed an R18+ rating would open up Australia to extremely violent and interactive computer games, and that it was “naive” to think that introducing a R18+ rating would keep adult material out of the hands of children. “The Government’s support for such a rating today should not be construed as a child protection measure,” he said. “Protecting children and maintaining some semblance of civil society means a line must be drawn somewhere.”

In addition, it appears as if the Western Australian State Government is currently debating the issue internally, with News.com.au reporting WA Attorney General Christian Porter is yet to determine the government’s position on the matter, and is under pressure to block the R18+ rating.

Perhaps the last word on the matter for today came from Ron Curry, chief executive of the Interactive Games and Entertainment Association, a strong supporter of the proposed rating.

“I think there’s still a few hurdles, but we are certainly much closer,” wrote Curry on Twitter this afternoon.