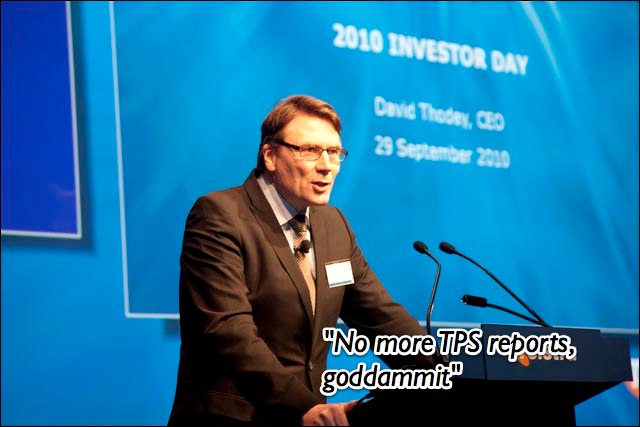 The nation’s largest telco Telstra has flagged plans to cut a further 950 staff as part of the latest stage in a dramatic company-wide simplification strategy being driven by chief executive David Thodey, stating most of those affected will be executives and middle managers in capital cities.

The news comes just a few months after the telco had already cut about 10 percent of its senior and middle management ranks in July — with the figure standing at about 330 at that stage. “Today’s announcement will mean an overall reduction of 950 jobs,” the company said in a statement today. “Affected employees will have access to assistance programs, and, based on their length of service, redundancy entitlements of up to 80 weeks’ pay.”

The company also announced today sweeping changes to the way it organises its sales and marketing teams around the nation.

For starters, Telstra will create a local management model based on the “successful” structure of its Country Wide division, creating 33 local area managers who will be responsible for the telco’s 5,000 points of presence — including shops and dealers — around the nation. Telstra’s Head of Retail Andy Ellis has been appointed to lead what Telstra said was the expanded Country Wide structure — reporting to Telstra group managing director of Consumer & Country Wide Gordon Ballantyne.

Thodey said the change would “finally” see a single sales model applied for Telstra nation-wide, replacing a flawed approach which had seen multiple lines of accountability and performance measured by “overlapping financial reports”.

“Telstra’s local area managers will now be responsible for all the shops, dealers and service in their local community, giving them the tools they need to run their business for local customers,” he said.

In addition, Telstra has created what it calls an “Innovation Office” within its Chief Marketing Office, to be led by chief technology officer Hugh Bradlow, who will join the marketing team.

In general, Telstra will also consolidate product management functions through its Chief Marketing Office led by Kate McKenzie. Product delivery, on the other hand, will be managed by Telstra Operations — “to ensure products are coordinated with the IT systems, delivery platforms and networks that underpin them”.

What Telstra describes as “tactical marketing” will be devolved to customer-facing business units — “to ensure that direct communication with customers will be driven by the managers closest to those customers”. However, “brand and strategic marketing” will remain in the CMO.

Although it didn’t give much details, Thodey also noted that Telstra would simplify the internal processes it uses to set budgets, measure business performance, allocate capital among competing projects, model options and forecast outcomes — collapsing “four processes into one”.