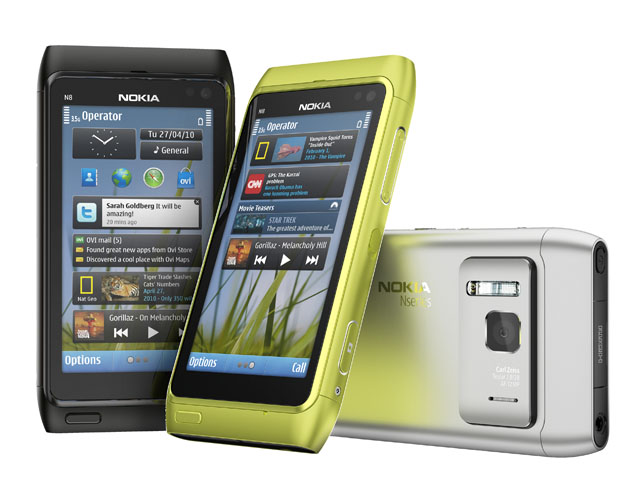 Finnish mobile phone giant Nokia this morning revealed it would sell its flagship N8 handset through all of Australia’s three major mobile telcos — Telstra, Optus and VHA — for $749 up-front from 1 November.

The handset is the first from Nokia to feature the company’s new Symbian^3 operating system, which includes a number of major upgrades allowing users to use multi-touch on its screen — delivering the ability to scroll through flicking one’s fingers on the screen, and pinch to zoom in. Other features of the new O/S include memory management — allowing faster multi-tasking — and multiple home screens.

The N8 will be the last in Nokia’s N-series line to run Symbian, however — with future devices to run the company’s new MeeGo platform, which it is currently developing with Intel.

The phone features a 12 megapixel camera with optics from specialist lens company Carl Zeiss, the ability to be connected to a home theatre system from a HDMI output and the ability to record high-definition video at 720p. A second VGA camera on the phone’s front allows video calling, and sound can be exported in Dolby Digital Plus.

The screen is a 3.5″ AMOLED capacitative display at a resolution of 640×360, and an accelerometer is included so that users can view the display in landscape or portrait mode, and a USB connector so that files can be stored on it. The device has 512MB of internal memory, as well as 16GB of on-board memory.

From a connections point of view the device will support most anything — from the HSDPA networks to quadband GSM — including Telstra’s 850MHz Next G network. And the device also supports Wi-Fi in the 802.11b/g/n standards, as well as Bluetooth 3.0 and more.

Nokia has worked with partners to develop a number of Australian applications specifically for the local launch of the phone — such as weather forecasting applications Coastalwatch and the Weather Channel, as well as news from Fairfax publications such as the Sydney Morning Herald, and even a wine rating service Corkscore.

“The Nokia N8 is the first step in our aggressive renewal of our smartphone range,” said Nokia Australia’s managing director Emile Baak. “We decided to stretch the boundaries of what consumers can do with a smartphone and at the same time, make it accessible to everyone at a price point that won’t break the bank.”

The news comes as Australia is currently being flooded with a wave of smartphones — and soon, tablets — based on Google’s Android platform, which Nokia has eschewed. In addition, Microsoft last week launched a number of Windows Phone 7 handsets locally from many of the same manufacturers that are also supporting Google.

And Apple’s iPhone 4 is also believed to still be selling well — with some retailers having had problems keeping the handset in stock after its launch earlier this year.