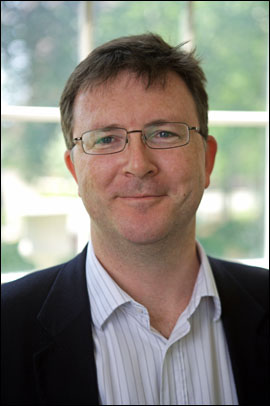 Eddie Sheehy has been the CEO of eDiscovery and email investigation firm Nuix since 2006, when he was appointed to commercialise the company’s technology after seven years of research and development. But he’s also a mad sailor and loves rugby — and his three children.

My first job was with Samuel Montague Merchant Bank in London as a graduate recruit. It was then owned by the UK bank Midland, which is now HSBC. My first job was all about understanding investment banking, how good companies worked and how to buy them.

The Australian technology industry is surprising, in fact, it always surprises you. In areas where you would think that US/European companies should be market leaders, Australian companies are rising to the top of the pile incredibly quickly. I don’t know if this is because Australian firms started earlier and became great quickly, or started later and missed the pitfalls, but it is always surprising where Australian technology leadership pops up. And it continues to every year in different areas.

My two great hobby passions are sailing and rugby. I had given up sailing for five years as my three children (and Nuix) were born and they became my priority, but I recently did the four day Magnetic Island Race Series and it was re-invigorating. After the experience, I can guarantee that more sailing will be on the menu.

The only problem for Australian technology (i.e. intellectual property development) companies is that they are created with a philosophy of value extraction via a short term sale to US multinational corporations. Australia needs to create a layer of investment and support which takes companies from being 5-10 year old companies with great intellectual property to being 20-30 year old organisations supporting customers in hundreds of countries and tens of thousands of customers with a genuine right to individual existence.

My family. I believe entrepreneurs are created initially by strong family input and reassurance. It is no coincidence that the world’s entrepreneurs are often the third or subsequent child. We receive the love and focus of our parents in the early years and the support, assistance and “safety net” of our siblings in the later years and that’s a great combination.