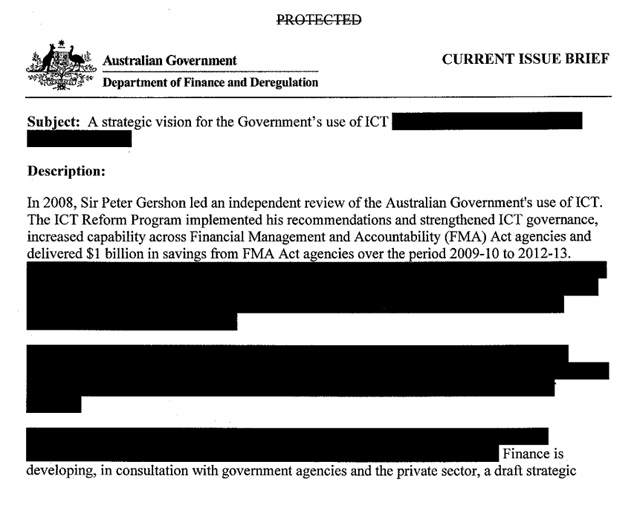 opinion When a government entity blacks out a portion of a public document, it always sparks intense speculation as to what has been censored and why. Is the hidden information dangerous for Australia’s enemies to know? Commercial in confidence? Or simply slightly embarassing?

Late last week the secretary of the Federal Department of Finance and Deregulation, David Tune, delivered a set of briefing documents regarding his department’s ongoing projects to its incoming portfolio ministers.

For Australia’s technology sector, the documents were notable for two reasons. The first is that — unexpectedly — Tune noted in them that his department’s primary minister, Finance and Deregulation Minister Penny Wong had agreed to move responsibility for the Government’s peak IT strategy group, the Australian Government Information Management Office, back to where it was during the Howard years.

AGIMO has enjoyed a golden age for the past three years under Kevin Rudd, boosting its power in the public sector courtesy of its direct relationship with outgoing Finance Minister and member of the “Kitchen Cabinet” Lindsay Tanner, who understood its vision and did much to push it in public and in private.

The agency’s shift in reporting line to Special Minister for State Gary Gray is effectively a substantial demotion. It will no longer have its fingers directly on the purse strings of financial power and has been shunted off into potential obscurity as part of the newly formed Government Business Office, alongside such unrelated areas as property management.

But what was more remarkable in the document was the extent to which Finance blanked out substantial portions of AGIMO’s current projects with black marker. I couldn’t help but laugh when I realised that part of the headline in a section dealing with AGIMO’s proposed ICT strategic vision was blacked out — even in the contents page.

AGIMO, apparently has “A strategic vision for the Government’s use of ICT CENSORED“.

Just what lies behind that censoring black mark, we may never know. But it does beg the question of what sensitivity a headline about a strategic ICT initiative could possibly have.

Further down, Finance censored a large section of text directly after a paragraph summarising Sir Peter Gershon’s extensive review of Federal Government technology use in 2008. And again, there was a chunk of text blacked out in the middle of AGIMO’s centralised internet gateway plans.

The question for the informed observer must now be, what exactly was blacked out?

For my money, I’m betting that the removals from the strategic planning section (see above) deal explicitly with the results of a review of the implementation of reforms stemming from the Gershon review – because this is the next historical step in the process, and would follow logically from the overview of the Gershon reforms.

In April 2010, Tanner’s office confirmed it had hired Ian Reinecke, the high-profile former chief executive of Australia’s peak e-health group NEHTA, to follow up on the Gershon reforms and find out how well they went.

I wouldn’t say that this is a review that AGIMO has cause to be afraid of. After all, on paper at least, the reforms were a success — at least if you believe what AGIMO and the politicians are saying about the matter.

There is no doubt, however, that Reinecke’s review has and will continue to cause AGIMO staff some nervous moments.

This is because its scope also includes recommendations on the future role of AGIMO itself. In essence, Reinecke’s report will grade AGIMO on its implementation of the Gershon reforms and make a recommendation for one of three cases — that AGIMO be broken up or have its responsibilities substantially downgraded, that the status quo remain, or that AGIMO should grow in importance in the Federal Government.

Reinecke’s governance of NEHTA showed him to be a canny political player, and being an IT industry insider, I would hardly expect him to recommend significantly adverse outcomes for AGIMO. Instead, I would expect him to suggest AGIMO’s powers be boosted moderately — with qualifications.

Reading between the lines of Finance’s briefing notes, it’s possible to surmise this is exactly what AGIMO is planning for. Despite its demotion, the agency made a substantial request for more responsibility in Government — asking for “a stronger role” and noting it was putting together “a draft strategic vision” that Gray — or even Wong — could take to Cabinet.

So if the Reineke report finds — as I expect it to — that AGIMO should have its role expanded, why would it have (theoretically) been excised from the public version of Finance’s briefing documents?
There are three lines of reasoning here.

Firstly, Labor has a history of not releasing controversial reports unless it is forced to (for example, the National Broadband Network Implementation Study), and the Reinecke report is obscure enough that it can get away with keeping it private — Reinecke’s own expectations notwithstanding. The blackout could simply reflect this (undemocratic) desire for privacy.

Secondly, Reinecke may have found problems with the Gershon reforms that are embarassing to Labor, and so it wants to keep them under wraps while AGIMO comes up with the next “strategic plan”.
This is not unlikely.

In the briefing documents published last Friday, Finance claimed the Gershon reforms had already delivered $1 billion in savings over the period from 2009 through 2013 (wait … it’s not 2013 yet — can they legitimately claim that?).

Personally, I believe most of the “savings” achieved through the Gershon reforms were not a result of real, substantive change in the way Australia’s public sector uses technology, but more in the vein of Sir Humphrey Appleby’s approach of simply shifting budgets around to make it seem as if there has been a great deal of activity.

There is simply little evidence of widespread change in the Federal Government’s use of technology over the past several years, apart from a few centralised procurement initiatives begun under Howard. Sure, a lot of headcount has shifted around, but by and large it’s the same people making the same decisions with the same suppliers and projects as it always has been.

The third case is a little more interesting — and probably gives Labor more credit for paying attention to the details than it deserves.

As I mentioned, I expect Reinecke to recommend that AGIMO’s powers be expanded. This view, however, may run contrary to Labor’s own view of the future of the agency.

If you collate the shunting of AGIMO out from under Penny Wong’s wings together with the axing of the Gershon fund for special IT projects during the election and the increasing power of Communications Minister Stephen Conroy advising Julia Gillard on the “digital economy”, it is possible to surmise that Labor’s leadership believes internal technology strategy is simply something it does not want to focus on right now.

It has its prize NBN project to demonstrate it is doing something about technology. If AGIMO’s powers are reduced, the departmental IT chiefs can go back to business as usual without ‘head office’ on their backs. In short, the briefing blackout last week may reflect a difference of opinion between the bureaucrats and the politicians on the future of AGIMO.

But this is probably drawing a long bow indeed — I expect most politicians and the Labor machine in general to overlook the existence of AGIMO almost entirely.

What do you think was censored from Finance’s briefing notes? The findings of Reinecke’s review? A secret AGIMO cloud computing plot? Or something else entirely? And why? Post your thoughts below this article or drop me a line on renai@delimiter.com.au.