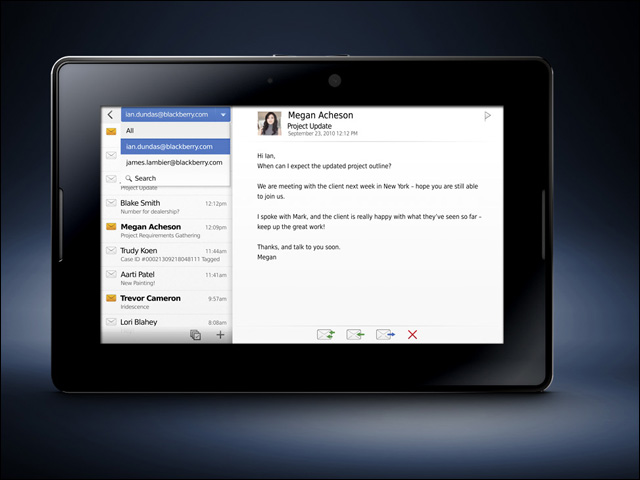 BlackBerry maker Research in Motion was today unable to confirm when its new PlayBook tablet device would reach Australia, or what expected local pricing was.

The device was unveiled overnight in the US, with the company stating that it was expected to be available in the US in early 2011, with rollouts in “other international markets” beginning the second quarter of the calendar year.

However, this morning a RIM spokesperson was unable to confirm that Australia would be included in the international rollout, or what the pricing of the new tablet would be like when it does hit Australia.

If the tablet does hit Australia in the second quarter of 2011, the launch will come nearly a year after Apple unveiled its own tablet device — the iPad — in Australia in late May. Apple’s device has already started making its way into large organisations, with education departments in particular currently conducting trials of the tablet in school and university environments.

A number of other tablet devices are also slated to launch in Australia in the near future — Dell’s Streak goes on sale locally next week, with Samsung’s Tab to come down under in November.

The PlayBook comes with a 7″ LCD WSVGA capacitative touch screen at a resolution of 1024×600, a 1GHz dual-core processor, 1GB of RAM, dual HP cameras on its front and rear, and support for 1080p HD video recording.

As previously reported — and unlike other tablet competitors to hit Australia’s consumer market — it does not support connecting to 3G mobile broadband networks, instead only supporting Wi-Fi access. However, RIM said in a statement that the company plans also to offer 3G and 4G models in future, and users will be able to pair the tablet with their BlackBerry phone for mobile access.

The tablet weighs about 400g and has dimensions of 130mm by 193mm by 10mm. It comes with a new version of the BlackBerry operating system geared at tablet devices.

Research in Motion also made a number of other announcements overnight — new BlackBerry enterprise application and web development platforms, an analytics service for developers, an advertising service for marketers, and new developer tools that would allow application builders to integrate social features into their applications.