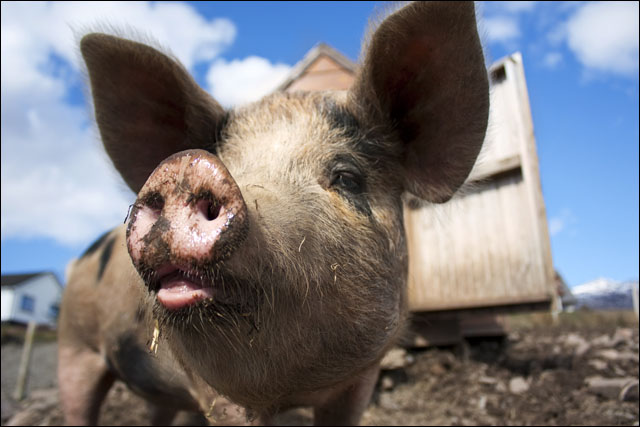 opinion I feel a little worried that David Braue might have peaked a little early in the first of his series of ‘seven deadly sins’ rants about election technology policies posted this afternoon. But then, that’s a common problem for those poor souls whose misfortune it is to suffer the titular sin which forms the underlying theme for his piece: Greed.

The reason for this is that David’s argument successfully pinions Tony Abbott and his ragtag bunch of fiscal conservatives on what is obviously the weakest aspect of the broadband policy which they so controversially laid out last week: Wireless.

But — as many pigs have discovered over time — heading straight for the feeding trough without keeping a watchful eye out for the farmer’s axe can lead one to feeling that they’re high on the hog when they’re actually a pig in a poke.

David correctly makes the argument that the wireless aspect of the Coalition’s broadband policy completely ignores a number of technological realities which will ultimately come back to haunt them over the next few years as they attempt to implement the ideas.

Forget the latency and throughput needs of medical, education and video on demand applications. Wireless broadband is crap for online gaming, and with Blizzard Entertainment unwilling to host World of WarCraft servers in Australia, generation Y just isn’t going to put up with a wireless future — as Macquarie University student Cassie put to Tony Abbott in no uncertain terms at the Rooty Hill RSL last night.

David’s also right to argue that it’s ludicrous that the Coalition wants to quarantine the spectrum shortly to be unleashed by the imminent demise of the analogue TV signal. It’s called the “digital dividend” for a reason – it needs to be divvied out so that Australia’s mobile networks have some kind of hope in hell of continuing to function when the iPhone 5 (and 6, 7 and 8) hit our sunny shores.

But the problem is that in focusing too strongly on the fallacy of the Coalition’s wireless broadband policies, David has completely ignored the fact that it’s not the Opposition who has gotten most greedy when it comes to broadband – it’s Labor.

The Coalition’s wireless idea may be a turkey, but at least it’s a cheap one — $1 billion for an outer metropolitan wireless broadband network and another $1 billion for the same in regional Australia. That’s $2 billion in total.

In comparison, nobody really knows how much Labor will need to spend running fibre out to every nook and cranny of Australia. The initial plan back during the last election was a mere $4.7 billion (still more than twice the cost of the Coalition’s wireless policy), but only five months later it had ballooned to $43 billion, a figure which appears to have been drawn up on the back of an envelope in KRudd’s private jet.

Estimates — admittedly outlandish ones — go all the way up to $80 billion for the full NBN rollout, and despite NBN Co’s deal with Telstra taking some cost out and the usual economies of scale, few people think the NBN is going to cost anything much south of $30 billion.

Yes, clearly it is not the Coalition which is committing the sin of greed when it comes to telecommunications policies during the 2010 Federal Election. It is Labor whose eyes are bigger than its stomach.

The Coalition’s wireless policy is silly, poorly thought out and might slam the brakes on the currently rapid development of Australia’s mobile broadband networks. But at least it’s cheap. As they say in startup companies, fail often and fail early. Let the Coalition quickly discover how futile their wireless policy truly is in government.

It might take them a year and $1 billion to do so. But compared to the tens of billions of dollars of debt Labor will saddle our children with if it wins a mandate to build the NBN, the Coalition’s wireless policies will cost pocket change that Australia can at least afford to splurge.

As Tony Abbott told the Rooty Hill RSL last night — after wiping the floor with Labor’s brave redhead leader — everyone wants to drive a really fantastic car. But in Australia’s case, it’s more important to buy the car that we can actually afford.