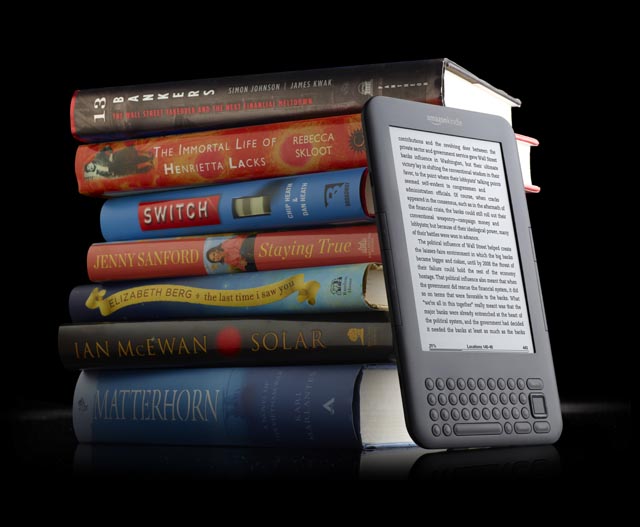 Darryl Adams is a government worker and internet tragic. A former IT worker, he still pines for the days of IBM keyboards that go CRUNCH and the glow of green screens. He can be found on on Twitter or on Facebook. Check out his site oz-e-books.com for more articles about e-book readers, retailers, formats and news (or will have when Darryl can be drawn away from reading Delimiter). The views expressed here do not reflect the views of his employer, the ATO.

opinion Recently I attended the local discussion group at local science fiction and fantasy book retailer Infinitas Bookstore. Only three people turned up (maybe because of winter) and we ended up discussing book selling with the owner, Tim.

To be honest, I was shocked at the negative information I was getting from Tim about his business, which is a major player in the SFF book scene and has been around since 1991.

I ended up asking him to tell me how many books I have bought recently. This was easy as Tim runs a loyalty programme. Two times a year, for each $150 people spend at the store, each customer gets a $10 voucher. I have managed up to 4 vouchers for a 6 month period, and I was a bit shocked that I was still below the first $150 threshold. And that was with a $50 hardcover I was picking up this time.

Are eBooks part of the problem? I would have to say yes. I am still buying books, and willing to buy hardcovers, but I am more choosy in what I buy. That is not to say I solely read eBooks, and some of the eBooks had me also go out and buy the dead tree edition of the books (The Mercedes Lackey, Eric Flint and Dave Freer Heirs of Alexandria series being the latest series I have paid for in eBook, Electronic Advanced Reader Copy and the paper version. Yes I am strange).

However, I have been less willing to purchase books in the traditional paper version unless I have read at least one of an authors works in eBook format.

But the market is changing in other ways too. Local publishing houses don’t care about the little stores. One anecdote Tim told us was that he had ordered from the local publisher a particular media tie-in book. When it failed to arrive, Tim called and found out the books were re-routed to a large retail chain. However, the books where on back order and Tim was still required to purchase the books, even though the sales had disappeared (why wait when you can go to K-Mart?).

Online sellers are not helping either. When Book Depository can ship a book free to Australia from the UK, and at a steep discount to the local price, even booksellers would have to question why they should source the book locally when they can pull out a credit card and order it from the UK.

And the local price is high. One anecdote Tim told me about local and imported books from the USA. I have decided not to write about it as it may bring distributor pressure, and the last thing I want to do is cause more grief for Tim, despite the fact parallel importing is totally legal.

However, Dave Freer has told me that he finds Australian books more expensive than South African books, and JD over Bookbee.com has an article on Australian publishers ignoring eBooks.

In addition, despite my opinion and the prevailing political belief that the economy has recovered, sales of books have dropped considerably. Tim has reduced staff and working hours in order to survive, and even he fears that his actions may not be enough. Other specialist book stores around Sydney have closed in the last couple of years, and large chains like Barnes and Noble are suffering in the US (the company recently announced it was going on the market).

Between the instant gratification of buying eBooks, overseas companies being able to sell books cheaper than in Australia, bone-headed Australian publishers and the economy, are we all forming an axis of evil against local book retail? I am a fan of Infinitas and have been a long term buyer there. However, I may be also part of the forces trying to kill it. And that, I find, is disturbing.