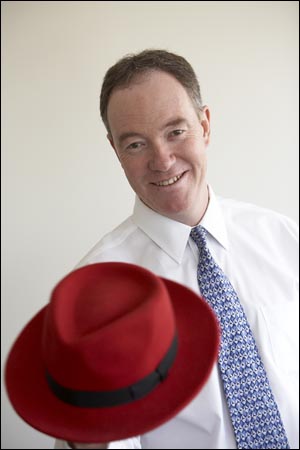 Max McLaren has for the past five years been pushing the cause of open source software in Australia in his role as general manager of Red Hat in Australia and New Zealand. But he hasn’t always been — he used to work just as hard for proprietary software as a Lotus Notes stalwart. Max is this week’s guest on the Friday Five.

Apart from the traditional role as a barman, for an itinerant colonial in London,I worked for one of the first IBM PC dealers in London in the early 80s selling PCs and software.

I never cease to be amazed at the latest whiz bang thing that revolutionises our lives!

I’m a pretty poor golfer, and console my self by tending my wine cellar.

The industry will be bigger and more competitive — and will continue to transform our business and personal lives as much as it has in the last five years. Just look at what we’ve seen evolve in the last five years that’s truly delivering value — apart from the iPhone! There’s SOA, social networking, virtualisation and of course, who could forget cloud computing.

I was lucky enough to work at Lotus Development in the 90s and was there for the start of the Lotus Notes revolution — it really did change the way we used technology and was a foray into the promise of what a world with unstructured data and collaboration for the standards based internet we know today, has started been delivering on. Ray Ozzie was one of the Lotus Notes pioneers, and I’m not sure it he is recognised as much as he should be for this.