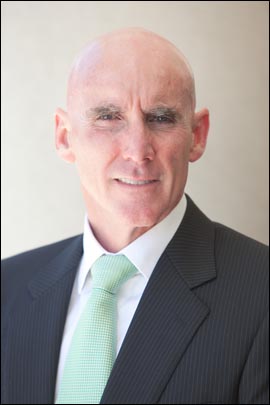 opinion I can’t help but imagine that NBN Co chief executive Mike Quigley (pictured) must have taken some time out last week to reflect on the strange symmetry of his life over the past few years.

Almost precisely four years ago, Quigley jetted in to Sydney from his normal job as president and chief operating officer of French networking giant Alcatel. His mission, it is believed, was at least partly to back up one of Alcatel’s largest customers – Telstra, in its battle to convince the Federal Government to back its idea to build a National Broadband Network.

At the time, Telstra had proposed a network that would see its copper cables replaced with fibre-optic infrastructure – but the fibre would only run a short distance from its exchanges, to so-called ‘nodes’ in neighbourhoods. The existing copper would do the rest of the job, with the whole plan to see 12Mbps ADSL2+ speeds delivered to millions of households.

Alcatel was hardly an impartial observer to the plan – if it went ahead, more than $3 billion would fall into the vendor’s coffers as the result of a memorandum of understanding with Telstra inked in November 2005.

And during his short stay in Sydney, Quigley pitched in for the cause, publicly questioning the viability of a rival proposal put forward by a group of Telstra’s rivals – the usual crowd, Optus, Macquarie Telecom, Internode, Primus and so on.

“To think that we could do this, fast, with a consortium of companies … it would be awfully difficult,” Quigley said at a lunch hosted by KPMG. “It’s not the way I’ve seen it done anywhere in the world.”

He also pilloried the idea that Telstra could be split up, describing it as “not simple and straightforward” to separate telcos’ wholesale and retail arms.

Now Alcatel never did end up collecting its $3 billion from Telstra – as the telco’s plans were cancelled due to a little policy which Stephen Conroy likes to call the National Broadband Network. And after a long and torturous route, Quigley’s now at the helm of another major networking company – the company in charge of implementing Conroy’s policy – NBN Co.

But the players, the gigantic sums of money and the game itself have, ironically, barely changed.

Last week it was NBN Co that announced a significant contract with Quigley’s old company, which is now a much larger company due to the merger with US-based Lucent.

NBN Co revealed that it had picked Alcatel-Lucent for a significant contract to supply up to $1.5 billion worth of optical and ethernet aggregation equipment – in short, likely exactly the same equipment that it would have been supplying to Telstra had the telco’s fibre to the node plans gone through some four years ago.

The Government is still trying to separate Telstra, but this time Quigley is on the other side of the fence. Although four years ago he said the idea was not simple, the executive has for the entirety of this year been negotiating with Telstra to make it work.

Last week NBN Co signed a deal with Telstra under which the telco will transfer its fixed broadband and telephony customers onto the NBN, give NBN Co access to its ducts and decommission its copper network, in a deal which has been almost universally applauded as being great for all parties involved.

As with Telstra’s deal with Alcatel, the ethics of NBN Co’s deal with the French company will be questioned by some in the industry. After all, there is Quigley’s 36-year past history with his new supplier to take into account – and that of NBN Co chief financial officer Jean-Pascal Beaufret, who served as Alcatel-Lucent’s CFO from 1999 through 2007.

NBN Co moved quickly to squash any allegation of bias in the deal – noting that neither pair participated in the selection process, price negotiations, or approval of the deal – as Telstra defended the circumstances involved in the signing of its own deal, back in May 2006.

Yes, Quigley must feel as though he is going around in circles, playing the same games with the same people – just four years later.

Of course, none of this indicates any wrongdoing on the part of the executive. But it does illustrate just how insular and repetitive Australia’s telecommunications industry can become at times. Telstra and NBN Co don’t have to work with Alcatel, after all – but it’s much easier if they do. The company has been supplying networking hardware to Australian telcos for decades and it has a substantial scale in its Australian operations.

Likewise, the Government does not have to constantly debate and push for the separation of Telstra, but most in Australia’s telecommunications sector will be happier if it does – because it’s in almost everyone’s interest (except that of Telstra) that the former monopolist’s power is gradually weakened and stronger levels of competition enforced.

But it does make us wonder whether Quigley ever gets tired of the same old, same old.