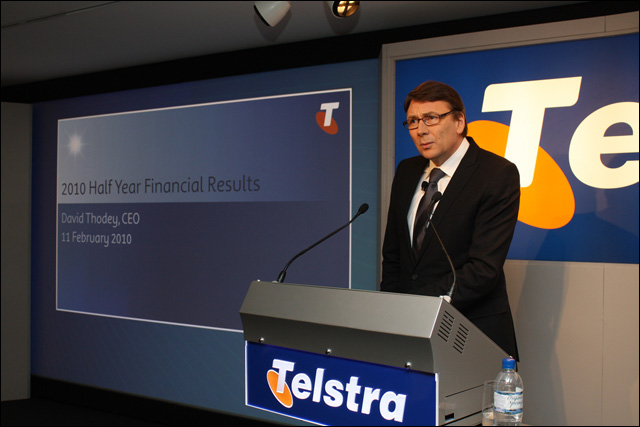 Telstra has signed a preliminary $11 billion deal with NBN Co that would see the telco migrate its telephone and broadband customers onto the fibre National Broadband Network, with its copper (ADSL) network to be shut down and no more broadband services to be provided over its HFC cable network.

The contract — dubbed a “Financial Heads of Agreement” by the pair – is non-binding and provides a framework for the final definitive agreements between the pair to be negotiated over the next few months, with Telstra expecting the deal to be put to a vote by shareholders in the first half of the 2011 calendar year. It will also be subject to approval by the Australian Competition and Consumer Commission and the Government as the sole shareholder of NBN Co.

The deal will also give NBN Co access to use Telstra’s ducts, pits and conduits for its own fibre broadband rollout and a right to acquire Telstra backhaul services and space in Telstra’s telephone exchanges. Telstra’s copper network, which currently provides ADSL services, will be decommissioned, although Telstra will retain its HFC cable network to continue to deliver pay TV services through its deal with its joint venture Foxtel.

The migration of customers to the NBN – which will see the customers remain Telstra customers, with the telco to buy wholesale services from NBN Co – and access to Telstra’s infrastructure will see Telstra remunerated to the tune of $9 billion in progressive payments.

The additional $2 billion will come as a result of public policy reforms that the Federal Government has agreed to as part of NBN Co’s deal with Telstra. A new entity, USO Co Ltd, will be established to take over Telstra’s Universal Service Obligations from 1 July 2012. The USO provisions currently see Telstra required to deliver standard telephone services, payphones and emergency call handling around the nation.

Telstra has also received written confirmation from Prime Minister Kevin Rudd that should the deal go through, Telstra would be able to bid for wireless spectrum required for the future development of its mobile broadband networks using the LTE standard, and that “sufficient regulatory certainty” will be provided on a range of matters that will allow the deal to go ahead.

$100 million will be provided to Telstra to help staff be retrained and redeployed as a result of the fibre changes, and NBN Co has been handed responsibility — from 1 January 2011 — as the wholesale supplier of last resort for fibre connections in greenfield housing estates.

In separate coordinated statements issued this afternoon, the deal was welcomed by Telstra, NBN Co and the Federal Government.

“The Heads of Agreement is consistent with the Government’s high-speed broadband vision and desired industry structure,” said Telstra chairperson Catherine Livingstone. “This agreement reflects a commitment by all parties to reaching a mutually beneficial outcome for Telstra investors, customers and the industry.”

Telstra chief executive David Thodey said the big T would continue to work with the Government and NBN Co on the detail required for the deal to go through. “While today’s agreement is an important step, a very significant amount of work must still be done on many complex issues,” he said.

NBN Co CEO Mike Quigley described the deal as “a sound outcome” for his company, because when finalised, the fibre player would be able to maximise the use of existing infrastructure and accelerate its fibre rollout.

“It also means Telstra is likely to become NBN Co’s largest customer as it progressively migrates its voice and broadband traffic to NBN Co’s wholesale-only, open access network, providing greater certainty about future revenues … while there is a considerable amount of negotiation and contractual work to go, we believe this agreement is a significant step forward to creating a more competitive telecommunications industry.”

“This historic microeconomic reform will ensure Australia finally has a genuinely competitive telecommunications industry which works for all Australian households and businesses, and helps to drive long-term productivity growth in our economy,” said a joint statement issued by Rudd, Communications Minister Stephen Conroy and Finance and Deregulation Minister Lindsay Tanner.