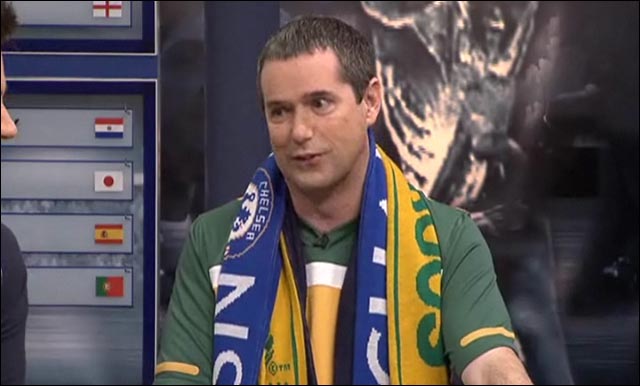 It was an eventful night last Wednesday night in Canberra … many politicians and their staff had late nights as Julia Gillard gathered support for her successful prime ministerial leadership push against Kevin Rudd. Throughout the process – and since – Delimiter has been trying to contact Communications Minister Stephen Conroy to ask what side he was on.

With a cabinet reshuffle coming up, many have begun to believe that rival Labor Senator Kate Lundy – a staunch Gillard supporter — should be a contender for Conroy’s own job. So we wanted to get Conroy’s thoughts on the matter.

It turned out we needn’t have bothered – Conroy had higher things on his mind, as he made clear during an appearance on Santo, Sam and Ed’s Cup Fever on SBS this week. You can watch his performance online — Conroy enters around the 13min mark. News of this story came first from iTnews.com.au.

Draped in the colours of his favoured soccer teams (Chelsea and the Socceroos), Conroy made it clear he was quite busy on the night of the spill.

“I stayed in parliament House until about 11, 11:15, then I went home, watched England play, set the alarm, got up at 4:30, watched the Socceroos, magnificant performance, and turned up with 2 hours sleep,” Conroy told the hosts.

“Everyone said were you up all night making phone calls, on the phone, lobbying for the leadership? I said no, I was watching the soccer.”

Conroy himself apparently plays in the Federal Parliament’s own soccer team – which he said squares off against all the international embassies in “a parliamentary world cup”. And it’s been doing fairly well.

However, Conroy’s team was beat on Wednesday morning by Malaysia – including, he said, three guys with mohawks, who “may have been ring-ins”.

The Communications Minister’s interest in the world game has previously been revealed – he’s an ambassador for the Football Federation of Australia and regularly attends games, including as a guest of various organisations, according to his parliamentary disclosure record.

And the minister also revealed one detail which most people usually prefer to keep buried in their past. Asked by a presenter what they could call him – Senator, Steve, etc, or “Conners”, Conroy replied that “Conners” was what people called him when he was a kid.