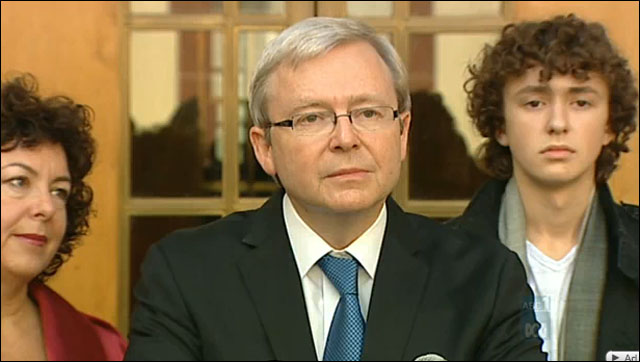 A tearful outgoing Prime Minister Kevin Rudd today told journalists he was “proud” of his Government’s work on the National Broadband Network, describing it as “the missing piece of 21st century kit for our country”.

This morning Rudd’s deputy Julia Gillard was anointed as Australia’s first female Prime Minister after a lightning factional battle inside the Australian Labor Party saw Rudd withdrawn from a leadership vote at 9AM this morning. I’m proud of the fact that we started to build the nation’s infrastructure, including a national broadband network which I fundamentally believe will transform this economy in ways which we have yet to conceive,” Rudd added.

“Fundamentally tansform our businesses, the way governments operate health services are delivered and the way in which education is delivered in our classrooms.”

Rudd said he was also proud of his Government’s Digital Education Revolution. “300,000 extra computers in classrooms — it’s a pretty big thing for a kid in a classroom who’s never seen a computer on their desk before,” he said.

During a separate press conference, new Deputy Prime Minister Wayne Swan said broadband — among other areas would continue to be a priority for the Government.

It remains unclear if Communications Minister Stephen Conroy — who has been the chief proponent of the NBN policy — will hold onto his portfolio, with Gillard flagging an imminent cabinet reshuffle and some of his strongest critics already backing Labor Senator Kate Lundy as a potential replacement.

Conroy’s press secretary has not returned repeated calls today to enquire whether — as Lundy was — he was planning to throw his support behind Gillard, as it is believed Conroy’s Victorian right faction within the ALP did.

The nation’s second-largest telco Optus this afternoon issued a statement saying it would continue to work with the Federal Government to implement the NBN, after the leadership change, and to put in place what it said was “important regulatory reform in the telecommunications sector”.

Image credit: Delimiter screenshot of ABC broadcast, believed to be usable under fair use doctrine