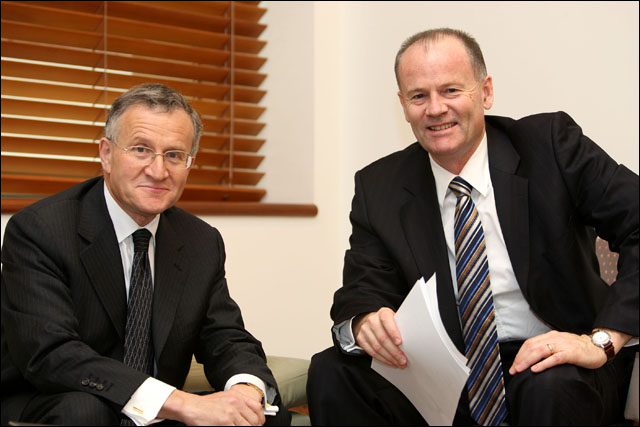 Finance and Deregulation Minister Lindsay Tanner has announced he will not re-contest his parliamentary seat at the next election, although he is willing to serve in his current capacity until that point.

Tanner has been one of the central Labor figures involved over the past decade in formulating technology policy. He served as Shadow Communications Minister from 2001 through late 2003, and even penned a book in the late 1990’s on how IT could be used to help resolve social and economic issues, especially describing a potential new economy based on information and services.

In his role in the Rudd cabinet since November 2007 he has presided over wide-ranging reforms to the information technology support function of the Federal Government — including the initiation of Sir Peter Gershon’s review into IT use and the implementation of recommendations stemming from it. Pictured above are Gershon (left) and Tanner (right).

He has also been closely involved in implementing the Government’s National Broadband Network policy — including dealing with Telstra — and the ongoing push towards using web 2.0-style technologies and practices in Government.

“Recently I advised Prime Minister Kevin Rudd that I did not intend to contest the forthcoming election,” said Tanner in a statement this afternoon, after announcing his decision in Parliament.

Tanner was due to discuss the matter with Rudd this morning at 9:30 AM — but the meeting was cancelled due to the leadership spill which has resulted in deputy PM Julia Gillard’s ascension to Rudd’s throne.

“After this morning’s caucus meeting, I advised incoming Prime Minister Julia Gillard of my decision,” said Tanner. “I indicated to her that I was willing to serve in my present role until the election, but that I would accept whatever decision she chose to make on that question.”

Tanner said his decision was entirely unrelated to the leadership spill, and was “entirely related to personal considerations”. The politician has no new job or position arranged — he expects to pursue opportunities in the academic and business worlds.