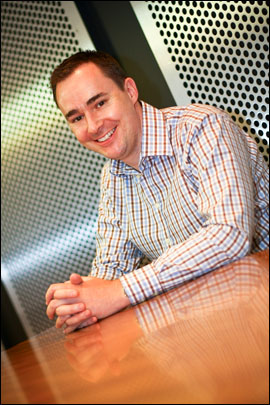 Phil Goldie (@philgoldie on Twitter, and he’s also on LinkedIn) is director of the Server and Tools Business Group at Microsoft Australia after spending some time at Nortel. He’s gradually losing his accent after arriving from the UK in 2002 and is now an Australian citizen.

My first ever job was, of course, the obligatory paper round. My first real IT job was in Manchester, England after graduating from University. I worked as a Unix sysadmin for the co-op at the head offices. A great job — I got to install early Firewall-1 on Solaris, work on large HP-UX systems — and Manchester is a great place to live when you’re 21 and starting work!

Constant change. There’s a lot to be said for working in an industry which seems to reinvent itself every few years.

Joining Microsoft in January and the arrival of our first daughter hasn’t left a lot of spare time recently. I love collecting and drinking great Australian red wines and have had a life-long affliction of supporting Aston Villa FC — a hobby which hasn’t always proven to be enjoyable!

I hope it continues to be a place for genuine industry innovation. If you look at the IT innovation out of Australia over the past decade, there have been some great industry firsts and market-changing products. Having worked for two multi-national IT vendors during my time here, I believe we’ll also continue to innovate in how we sell, market and consume technology. Our local Microsoft subsidiary is often recognised as an innovator in how we take new products to market — something that’s representative of the entrepreneurial spirit in Australia.

When I joined Alteon Websystems in 2000, the CEO, Dominic Orr, was an awesome guy to work for and in a small company we got to meet several times. I loved his mantra of “make impact, make money, have fun!” and we certainly did all three. I’ve been lucky to work with a lot of smart people so far and have learnt a huge amount from each of them.