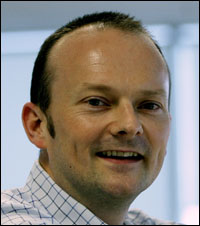 Sean Boiling is Oracle Australia’s sales consulting manager for its Fusion Middleware line; a position he came to after Oracle’s 2008 acquisition of BEA. With 20 years’ of experience in IT, Boiling has seen it all — his blog says he’s worked with “most of the styles of IT plumbing that have been popular in the last 15 years”.

But don’t be fooled by his pleasant attitude — his LinkedIn profile says he was educated in “the School of Hard Knocks”. Boiling lives and works in sunny Sydney and Twitters at @sboiling.

Sales assistant on a fruit and veg stall in the twice weekly market in Melton Mowbray back in England – you know, the guy that shouts, “new season apples, cox’s orange pippins, 2lb for a pound”? That was me, aged 16.

The pace of change, the constant innovation, the opportunity to always be learning something new.

Cycling, commuting to work on my bike is a bit of a hobby I suppose, and mountain biking in my spare time. Specifically some of the endurance events that are out like like 24 hour races and 100km races. I’m in no danger of threatening the podium but really enjoy getting out and riding my bike.

Great question… Makes me think where where was it 5 years ago? I believe in off-premise, as-a-service, on-demand models for IT, so I think we’ll be a lot cloudier than we are now.

Two Scotsmen actually who were my first bosses. A guy called Jim Quigley who was my first manager when I got my first ‘real’ job and joined the full-time workforce – I learned a great deal from him about responsibility and working for your customer.

And a guy called Paul Lewis who was my first boss in the IT industry – without his help and guidance I would never have made it to Australia, he really opened up my eyes to the breadth of possibility that’s available to you if you’re open to it and if you work hard for it.