We’ve spoken to Macquarie University chief information officer Marc Bailey about the device before (he was quite positive about it), so we weren’t surprised to see that he’d picked one up.

Altium CIO Alan Perkins is a big supporter of cloud software, so we likewise weren’t surprised to see he had an iPad, although we’re sorry to hear that he’s been sick.

But when it was when we started casting our net a little further to CIOs that we don’t know that well personally that we started to find we had a bit of a trend on our hands. University of Wollongong CTO Joe McIver, ACT Department of Education, Employment & Workplace Relations CIO Glenn Archer, Queensland University of Technology director of Facilities and Infrastructure Graham Keys … they’ve all got iPads!

You might think that the plague of CIOs with iPad stops there. But it doesn’t. It just gets worse. Dealsdirect.com.au CIO Mark Cohen has one:

And it looks like John Sheridan, division manager of the Australian Government Information Management Office might be eyeing one off:

Curtin University CIO Peter Nikoletatos at least has access to one, although we’re not sure if he owns one:

Leighton Holdings general manager of Information Systems Sean Kaye has posted a comprehensive review of the iPad, including his thoughts on its use by senior managers: 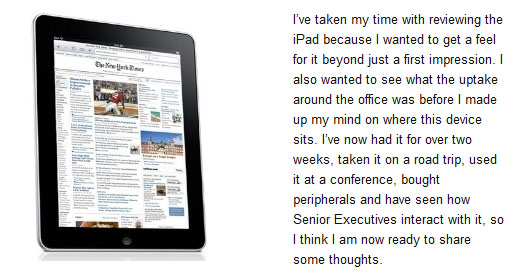 When we investigated one Australian chief information officer — Ray White CIO Steve Berg — however, we found absolutely no evidence that he had bought one of the hyped Apple tablets. But we think this might be because he’s in love with another gadget.