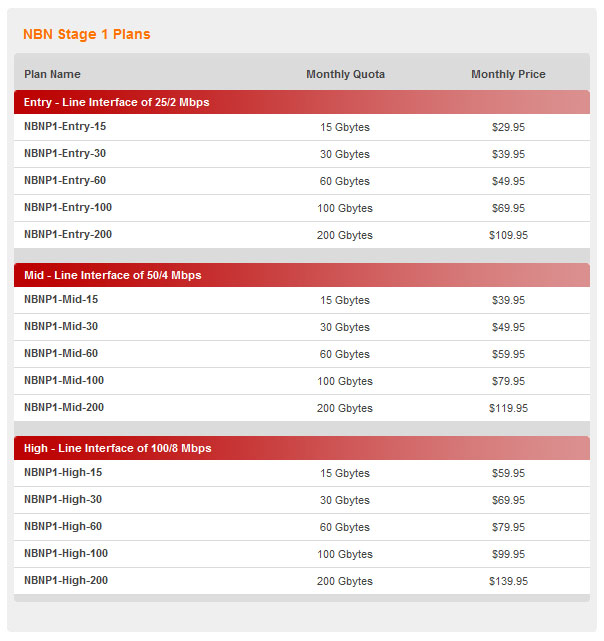 Available for order today, Internode announced today 15 Fibre to the the Home (FTTH) plans for the National Broadband Network (NBN) Stage 1 pilot program in Tasmania, with installations expected to be started from early July.

Internode has an offer for free fibre set up for consumers in the three coverage areas of Stage 1; the Hobart suburb, Midaway Point and two Tasmanian towns Smithton and Scottsdale.

The 15 plans are broken into three tiers of pricing with entry level at speeds of 25Mbps downstream and 2Mbps upstream, mid at 50Mbps/4Mbps and high at 100Mbps/8 Mbps. Plans start from $29.95/month for 15GB of data allowance at the 25Mbps/2Mbps speeds — a price which is $10 cheaper than Internode’s cheapest broadband plan, to make FTTH more attractive to consumers.

“We believe price is the catalyst for rapid adoption,” said Internode’s managing director Simon Hackett. ”Customers, both in Tasmania and nationally, should keep in mind that this initiative is designed as a pilot program. These prices and products may bear little resemblance to what emerges under the NBN proper, but it’s a great start to offer plans that are affordable for ordinary people.”

Internode is the last of the three ISP’s chosen to offer FTTH services using the NBN Tasmania fibre optic network to reveal their NBN pricing plans. Primus was the first to announce their FTTH prices on May 19 with its entry level plans starting from $39.95 per month for 15 GB at 25Mbps speeds.

The FTTH pricing plans offered by Internode have a life span up to June 30, 2011 and are to be treated as a market test. Customers that purchase Internode FTTH plans can choose to keep their existing traditional landline telephone or use the company’s NodePhone internet telephony services as fixed line phone service through the NBN premises telephone port will not be available from Internode.