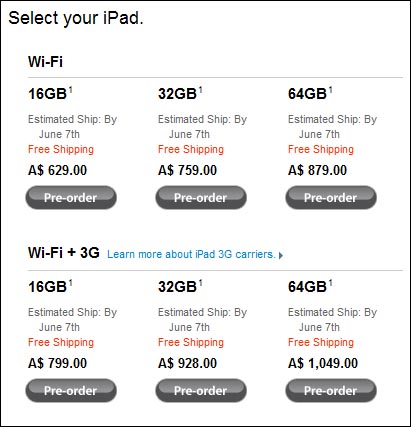 The Australian shipping date for Apple’s iPad appears to have been shifted back from May 28, with Apple’s online store now listing the “estimated” date as “by June 7th”.

It was only last Friday night that Apple had revealed 28 May as the Australian shipping date for the hotly anticipated tablet device, with orders being taken from last Monday. But it appears that those who have pre-ordered iPads may have a little longer to wait.

Apple’s Australian spokesperson has not yet responded to a request for comment on the issue.

The news also comes as mobile telco VHA has not yet revealed its Australian pricing plans for 3G mobile broadband access on the iPad, or whether it will directly sell the device.

Optus and Telstra have both released the pricing of their stand-along iPad offerings earlier this week — but like other international telcos, neither will directly sell the iPad. Apple has previously said the iPad would be sold through its own retail outlets as well as its Australian website select Apple Authorised Resellers — but it has not yet said precisely which authorised resellers will be able to sell the device.

So far, Optus’s plans have the most variety on offer, with the telco offering both pre-paid and post-paid plans in Australia, unlike Telstra, which is only offering pre-paid plans.