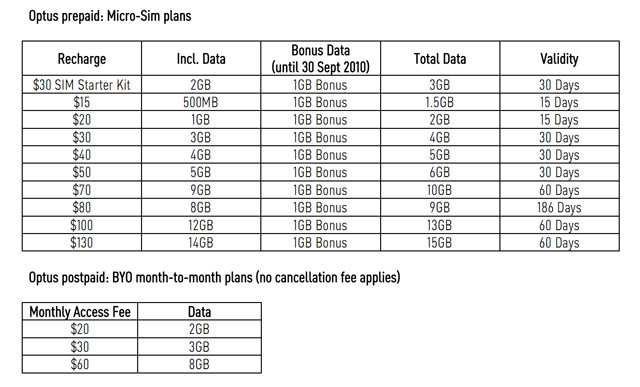 Optus this morning revealed its full pricing plans for mobile devices that use the new Micro SIM card — found in Apple’s highly anticipated iPad device, which is slated to hit Australia from 28 May.

The plans come in both pre-paid and monthly plan varieties, unlike Telstra, which on Sunday only revealed pre-paid iPad plans. VHA, which operates the 3 and Vodafone brands, has not yet revealed its iPad plans.

Optus has three monthly iPad plans, all of which require no yearly contract and feature no cancellation fees. The three offerings cost $20, $30 and $60 per month, and feature 2GB, 3GB and 8GB of included data downloads respectively.

The telco will charge $30 for its Micro SIM starter kit, which comes with 2GB of included data. From then on users have a range of recharge options, startin at $15 for 500MB of data and ranging up to $130 for 14GB of data. Until 30 September this year, each recharge comes with an addition 1GB of data downloads.

Telstra’s pre-paid iPad plans require users to use their data allowances within 30 days of purchasing them, and some of Optus’ plans are even worse — for example, if you recharge your Micro SIM with $15 or $20 worth, you have to use the included 500MB or 1GB of data within just 15 days.

However, on larger amounts customers have 30, 60 or even 186 days to use their allowance — with the 186 day limit only applying to the $80 recharge (which includes 8GB of data). Optus will start offering its Micro SIM plans from 26 May 2010.

The telco has also launched a website — OptusBeFirst.com.au — to promote the new Micro SIM packages, but the site doesn’t mention the iPad, stating it is promoting “the new tablet-ready Optus Micro SIM”. The site is being advertised through Google.

“Register now, so you’re all set to switch on your tablet and discover incredible new apps, purpose-built games and much more,” the site exhorts potential customers. “Touch the future first with Optus.”

So far, a VHA spokesperson has only said the following about its own plans: “Vodafone and 3 Mobile’s iPad data plans will give customers access to real innovation at a truly affordable price. Customers will be getting great value from a company that really understands why fast internet that doesn’t break the bank, or limit their enjoyment or freedom, matters.”

Neither Optus nor Telstra will sell the iPad directly, but VHA has not confirmed whether it will or not.