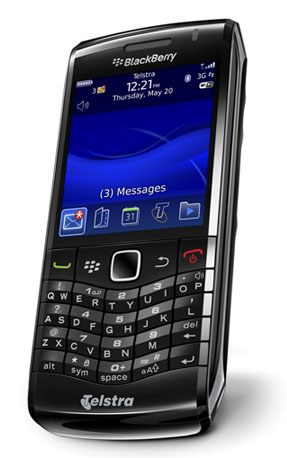 The nation’s largest telco Telstra today revealed it would exclusively sell Research in Motion’s BlackBerry Pearl 3G for three months when the smartphone launches in Australia “later this month”.

In his preview of the Pearl, CNET.com.au reviewer Joseph Hanlon wrote that the device had the right specs under the hood — with a 624MHz processor, similar to the popular BlackBerry Bold. Two keyboard variations are on offer — the standard QWERTY BlackBerry layout or a more normal phone keypad combination.

Telstra today wrote in a statement that the Pearl would be available in Australia in purple and black colours. The device includes support for Telstra’s Next G network, as well as Wi-Fi support (802.11b, g and n) and GPS.

The telco separately in statements yesterday and today has announced revamps of its mobile pricing plans.

Yesterday the telco said on its Telstra Exchange blog that its new consumer plans had increased in value compared with its previous Cap and Ultimate plans, and it had added in the flexibility for customers to use their included voice calls and SMS data to any network in Australia.

“Our customers have been telling us that they’d like better value from our mobile and broadband services and we’ve been listening,” Telstra executive diector of business performance in its Consumer division, Peter Jamieson, wrote on the blog.

Separately today, Telstra said in a statement that it had launched new business cap plans, including a new $159 Cap plan, the same flexibility to call other networks, higher Cap allowances, monthly data llowances of 30MB to 1.5GB and the same call rate for video and voice calls. More information is available at Telstra’s business site.

Telstra executive director Brian Harcourt said the plans were aimed at smaller businesses with only a handful of handsets. “We’ve tailored these new plans changes to reflect both the changing needs of these Australian small businesses as well as the surge in Smartphone take up and increased need for data,” he said.

“If customers want more data they can simply move to a higher business cap plan or take-up a separate data pack to increase their allowance such as our $19 plan which provides an additional 1GB of data.”