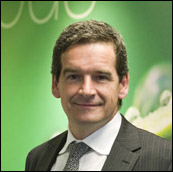 Commonwealth Bank technology chief Michael Harte (pictured) got some humdinger questions after his lunch speech to the Committee for Economic Development of Australia (CEDA) last week.

A rival executive from Westpac got up and asked him about CommBank’s core banking strategy, and Harte was also quizzed by representatives from CSC, core banking systems vendor Rubik, Gartner and Deloitte.

But the real test of Harte’s beliefs came from KPMG IT advisory director Guy Holland, who we suspect knows Harte from his time as sales director for the financial services sector at EDS Australia from November 2006 through May 2009 — during which time Harte would have had plenty of contact with the IT services giant due to negotiations over CBA contracts.

While other questioners asked about CBA’s core banking strategy, Holland got right to the point.

“Good afternoon Michael. Guy Holland from KPMG. I just wondered as a New Zealander living in Australia, what are your predictions for the Bledisloe Cup this year?” he asked. “Great question,” rejoindered the MC, according to the transcript.

The ever-diplomatic Harte acknowledged the strength of the Australian team.

“What I’m really scared about — and the big question is, what’s going to happen next year in New Zealand in the World Cup — and I really think that the Wallabies have gone from strength to strength and could take it, and they look really, really competitive. So good luck,” he said.

“Look, I think they’re both great teams … You’ve got a great coach and if he’s successful that’s a wonderful outcome.”

But ultimately the CIO — who was raised in what many in Australia refer to as “our Eastern Island” — had to go where his heart was.