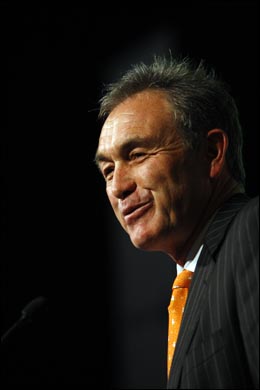 Chris Chapman, the chairman of the Australian Communications and Media Authority, yesterday went into a fair amount of detail about his personal household broadband connection.

Chapman had, he said, been enmeshed in “the telco experience from hell” over the past few months.

On the first hour of the first day of each month, Chapman (pictured) told the Communications Day Summit in Sydney, his broadband connection started frantically downloading data at 10Mbps. This went on until his download quota expired that month, he said. And the problem continued from one month to the next.

The ACMA chief’s first port of call to solve the problem was his 17-year-old son’s bedroom, where some “harsh words” were dealt and the poor kid was put through what Chapman called “the Star Chamber”.

With his son continuing to plead innocent, Chapman’s next port of call was his neighbour — was someone else piggy-backing on his Wi-Fi connection? This also came up a blank.

The public servant then called his ISP, who maintained it wasn’t their fault Chapman’s internet connection was being eaten up every month. You can’t blame the poor tech support for feeling a bit nervous due to Chapman’s high rank within the telecommunications sector — although at least it wasn’t an irate Communications Minister demanding a broadband fix.

Most geeks would have been able to sort this out fairly quickly by turning off various household computing devices and finding the downloading cuplrit, but Chapman said it took him a while to find the culprit.

“I’m just an average punter, but it took four months and a great deal of frustration,” he said.

And the culprit? A synchronisation tool that several of the PCs in Chapman’s house had installed on them. The data was actually being funneled from one PC to another — through the household’s broadband connection and the internet.

The only problem for Chapman was that it wasn’t the ACMA chief himself who had installed the tool. And it certainly wasn’t his 17-year-old son.

It was his wife.