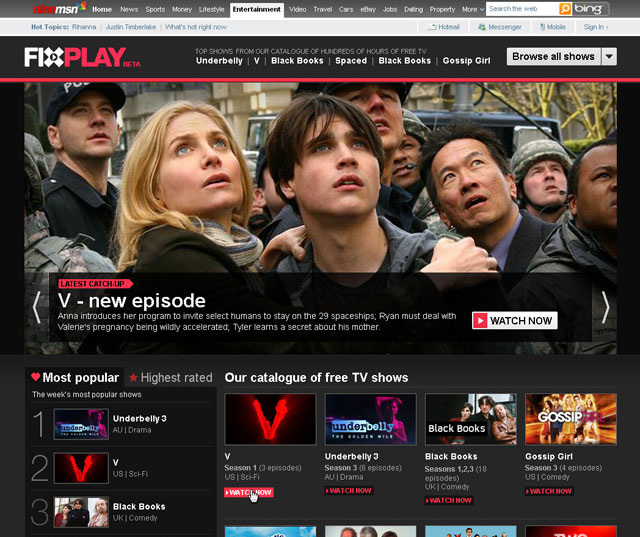 Microsoft and PBL Media joint venture ninemsn has launched a new Silverlight-based online video portal, FIXPlay, which it today said would aggregate hundreds of hours of current and back-catalogue content from the Nine and GO! television channels, as well as well from international distributors like the BBC and Warner Bros.

However the site, fixplay.com.au, does not appear to be online yet this morning.

In a statement issued this morning, the company said audiences would be able to stream local TV shows like Underbelly: The Golden Mile, RPA and Getaway, as well as back-catalogure shows like McLeod’s Daughter and Sea Patrol. In the coming weeks it will add The Block and The Footy Show to its list.

International shows to be made available over the service include Two and a Half Men, The Mentalist, V, Big Bang Theory, Gossip Girl and Vampire Diaries from Warner Bros, as well as Doctor Who, Little Britain, Spooks, Hotel Babylon, Torchwood and the Mighty Boosh from the BBC, and Shameless, Balls of Steel and Father Ted from the UK-based Digital Rights Group.

The site will not use the Adobe Flash online video technology popularised by online video sharing sites such as YouTube. Instead, it will use Microsoft’s rival Silverlight standard.

The news comes as ninemsn rival Yahoo7!, which has access to content from Channel Seven, and Channel 10’s own online portal, have increasingly been ramping up their own online offerings, especially what they dub “catch-up TV”, in the wake of the success of other streaming platforms like the ABC’s iView.

However, not all episodes of all shows are available and some shows may be taken down after a certain period of time. In addition, the quality of much of the content is not suitable for displaying on high definition televisions, as it streams at a lower resolution.

Some TV shows, such as Channel Seven’s Sunrise, are using YouTube to display much of their content, which allows the content to be embedded in other sites. The show is attracting a significant amount of views via the Google-owned video sharing site.

However, in general, the television stations do not facilitate users to take their content with them and play it on portable media devices such as the Apple iPhone as the ABC does with its shows and podcasts.

ninemsn said in today’s statement that it launched “Australia’s first catch-up TV service” on Wednesday 17 May, 2006, with McLeod’s Daughters. Since its inception, the joint venture’s catch-up TV service has delivered hundreds of thousands of catch-up TV episodes, the statement said, including Underbelly: A Tale of Two Cities, which had experience almost 300,000 downloads of its second season.