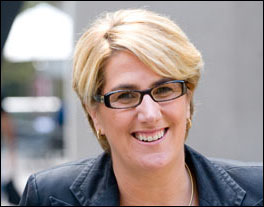 Web joint venture ninemsn is on the hunt for a new chief executive, following the revelation this morning that its current leader Joe Pollard had resigned her role and would leave the company at the end of September.

Pollard has been with the company which would become Nine Entertainment Co (formerly PBL Media) since 2006, when the executive joined the company as sales and marketing director. Pollard then started working with ninemsn’s commercial division (ninemsn is a joint venture between Nine and Microsoft) in 2008, before being appointed ninemsn chief executive in October of that year.

In a statement this morning, Pollard revealed she had resigned and would leave the company at the end of September.

“It has been an amazing three years at ninemsn and five years within the group,” said Pollard. “It has been a pleasure to lead an incredible team of passionate and dedicated people. I leave ninemsn after our most successful year ever and the business is set up for a fantastic FY12. It is now time to move onto the next chapter of my life.”

“In my time here, the business has gone from strength to strength and I leave with a strong executive team in place and the business running smoothly. I would like to thank both Nine Entertainment Co. and Microsoft for giving me the opportunity to run this dynamic and exciting business”.

Microsoft’s Asia-Pacific chief Tracey Fellows said: “As a board member for ninemsn, I had the pleasure of working closely with Joe and saw first-hand how she built a vibrant, highly-effective culture at ninemsn. I’d like to thank her for leaving this culture as a foundation for the team. We will miss her and wish her well in her new endeavours.”

A spokesperson for ninemsn confirmed the company was looking to recruit a new leader, with Pollard to continue to lead the company until the end of September.