Judging from its Twitter account, it looks like someone at Adobe Australia and New Zealand has been told to drum up support for the company’s upcoming launch of its Creative Suite 5 products (Photoshop, InDesign and so on).

To start with, it seemed like it was someone’s job to remind the great unwashed of the event every morning when they got into work:

But then the same tweets started appearing more than once per day.

And then they got a bit more personal, targeting individual designers:

But things really started to heat up when the CS5 Asia-Pacific team started Twittering seriously, speedily garnering 339 followers to date. There was a certain similar theme to most of its entries, that was echoed by Adobe’s Australian and New Zealand Twitter accounts: 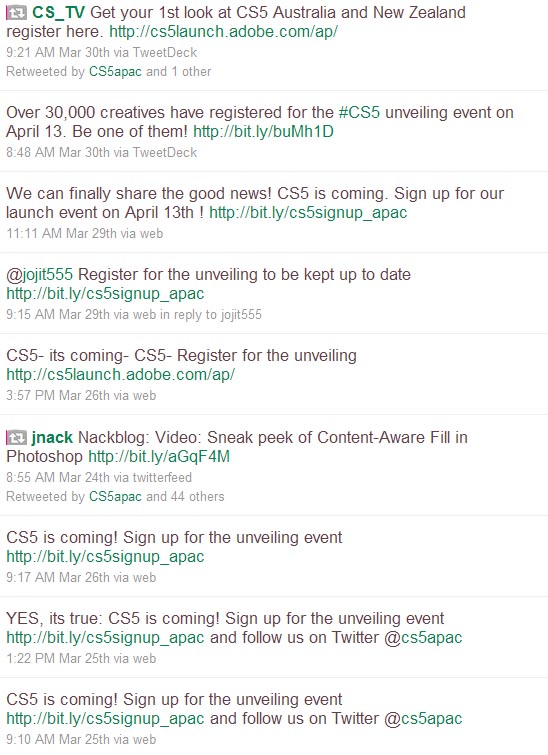 The company’s new social media approach is also reflected in its approach to journalists.

“Keep up-to-date with the CS5 launch on Twitter at and remember to use the CS hash-tag if you mention it on Twitter: #cs5,” a statement issued to Australian journalists this morning enthused. “Go local by following the APAC Twitter site. Be sure to check out the # tag for CSBuzz on Twitter: to see what the CS community is talking about.”

There is a word for this, Adobe. That word is “spam”. And it’s never excusable, even if you do try and link your upcoming IT launch to a popular annual holiday.