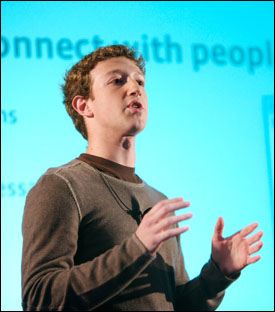 I hope you’re well and not worrying too much about those little incidents that happened back in 2004 when “the Facebook” was still in its early days.

Of course the press is making a big deal out of it now. They like to dig through the history of important people like yourself before you became important, and find out dirt. As I recently reminded your good friend Steve, you can never trust journalists, especially bloggers — they are the worst kind of journalist.

If I were you I’d especially keep an eye on that Michael Arrington guy at TechCrunch. I mean you shouldn’t put a bunch of private investigators onto him like HP did with some technology reporters, but at least have a look through his Facebook account now and then — you know, the private mail thing.

If you find out anything, you should make sure to post it on Twitter. Do you use Twitter yet? If not, you should really get it, it’s the new thing that everyone’s using.

Anyway, I thought I should write you a letter because I wanted to thank you for all the hard work that you and your team put into “the Facebook”.

For starters, I wanted to thank your team for going through every group and every post on “the Facebook” and making sure that they’re all OK.

I know that you guys have buttons on “the Facebook” where people like me can report inappropriate content. But even when I see something that is clearly bad stuff, I never report anything, because I know that your team is sorting through everything, day and night. You can’t post just anything on “the Facebook” and get away with it, can you Mark? You guys notice everything.

I know it’s hard to understand sometimes what we’re talking about in Australia, like how you deleted that group campaigning for an R18+ video game classification or when Anna Blight wrote you that letter complaining about the people posting things on that memorial page.

But I know you eventually work it out. Like how you reinstated the R18+ group and sent that nice letter to Anna.

Also, I wanted to thank you for sending Paul Borrud down to Australia to represent “the Facebook” here. Some people here (and again, it’s usually those pesky bloggers) are claiming (I know, it’s ridiculous) that Paul is a “toothless tiger” because even when something important happens, you never let him comment on behalf of “the Facebook”.

They say you don’t really care about Australia, that if you did you would have a proper office here like Google or Microsoft. But they never say anything about Twitter not having an office here. But then Apple does, so maybe it’s OK.

Anyway, other people have said that Paul is really here just to sell advertising to those “digital agencies” which everyone on Twitter works for. But if that was true, wouldn’t he be selling advertisements to the “social media experts”? There are a lot of those on Twitter as well.

Are there any “social media experts” on “the Facebook”, Mark?

Anyway, I know that you really trust Paul, Mark, or else you wouldn’t have sent him to us.

It’s like what Mike Murphy said when Paul arrived — he has experience helping “advertisers engage customers on Facebook”. That’s really romantic, Mark — I had heard of people getting “engaged” on “the Facebook”, but I didn’t know it was Paul’s job to help that happen.

Anyway, the only other thing I wanted to tell you was that you don’t need to worry about this “online ombudsman” thing that Kevin07 is talking about.

Kevin really likes “the Facebook”. He even has his own Twitter page and everything. But he needs to make sure that he keeps Senator Nick Xenophon on side so that he can get his bills through Parliament. I didn’t know you got bills for being in the Senate, Mark, but maybe that’s why Mr Conroy is so mad all the time?

Anyway Mark, thanks for reading my letter. I would have posted it on your wall, but I know a lot of people do that, and you wrote back to Anna, so I thought maybe you would write back to me. So I hope everyone at “the Facebook” is well.