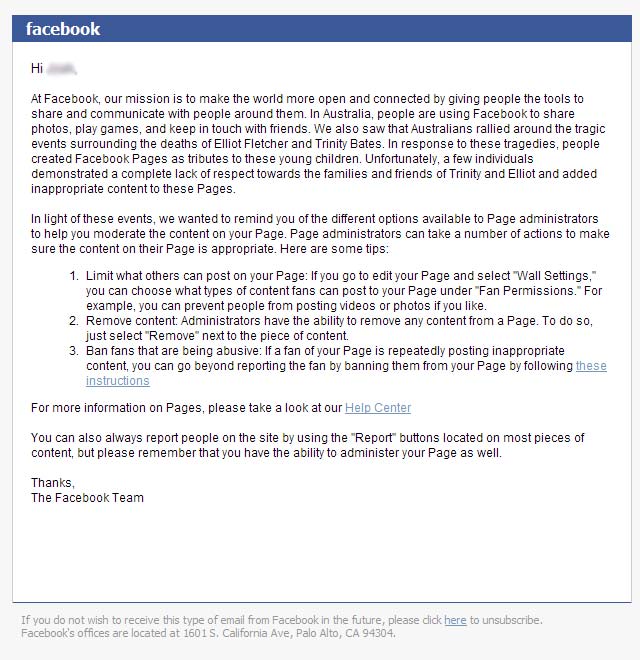 Facebook appears to have directly contacted Australian administrators of Facebook Pages to remind them of tools available to moderate objectionable content within their sub-sections of the giant social networking site.

The company has recently come under increasing pressure from a number of parties in Australia to clean up its act. For example, Queensland Premier Anna Bligh wrote to Facebook chief executive Mark Zuckerberg in late February, appealing for help in blocking offensive material from being posted on memorial sites for Queensland girl Trinity Bates.

Shortly after, Prime Minister Kevin Rudd said he would investigate an idea being promoted by Sunrise and independent senator Nick Xenophon to setup an online ombudsman to deal with such complaints. He said it was obvious which material went too far, and rejected any criticism that it was draconian to address offensive online material.

In a letter emailed to at least two administrators of a Facebook Page this week (one seen by Delimiter and one other), Facebook said it was aware that Australians had used the site to rally around the tragic events surrounding the deaths of Elliot Fletcher and Trinity Bates.

“Unfortunately, a few individuals demonstrated a complete lack of respect towards the families and friends of Trinity and Elliot and added inappropriate content to these pages,” it said.

“In light of these events, we wanted to remind you of the different options available to Page administrators to help you moderate the content on your Page.”

“You can also always report people on the site by using the ‘Report’ buttons located on most pieces of content, but please remember that you have the ability to administer your Page as well,” the note, from “The Facebook Team” said.

Delimiter has contacted Facebook’s Australian public relations agency by email to ask for a comment and to verify the email is genuine.