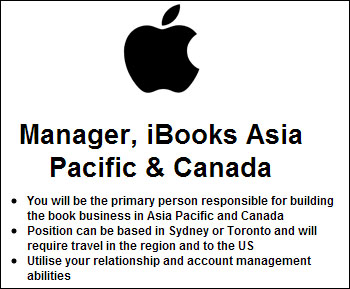 Iconic technology giant Apple has advertised for an executive to manage its fledgling iBooks product for the Asia-Pacific and Canada regions, adding the position could be based in Sydney or Toronto.

The advertisement — placed on Australian site Seek — states the executive will be “the primary person” responsible for launching and growing the company’s electronic books business in the Asia-Pacific and Canada regions “and building an extensive offering for customers”.

“This position is responsible for launching and growing the iBook business in Asia Pacific and Canada and building an extensive offering for customers,” the ad states.

“This will involve working with the iBooks and iTunes teams in Cupertino, Canada, Australia and other countries, and with content partners to secure content from US, international and local providers, and to market that content on the iBooks store and through other marketing programs.”

The company is planning to launch its new iPad tablet device in Australia in late April, although it has not formally stated it plans to launch the associated iBookstore feature in Australia at that time. A number of other major eBook players such as Amazon are currently ramping up their presence in Australia.

The ad, however, explicitly mentions Australia, stating the hired executive will aid in determining strategies and priorities for iBooks in Canada, Australia, New Zealand and other countries.

Apple is looking for an executive with 8-10 years “relevant publishing experience”, with 2-5 years working in online media, a bachelor’s degree with a strong analytical background, with a Masters in Business Administration “a plus”, and international work experience.

After this story was published by Gizmodo this morning, we were informed that iphonewzealand.co.nz and GoodGearGuide covered it based on other advertisements on 3 March. The Seek advertisement appears to have gone up this week.