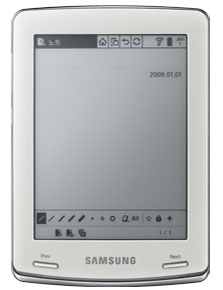 The Australian market for ebook readers continues to heat up, with giant Korean manufacturer Samsung confirming late yesterday that it was planning to bring its own range of the devices to Australia “in the second half of 2010”.

“We are eager to bring these new models to market here as soon as enough suitable content is available,” confirmed Samsung Electronics Australia’s national product & marketing manager – IT, Emmanuele Silanesu, after an initial report by APC Magazine revealed the company’s plans.

The executive said pricing was yet to be confirmed on the devices, but the company was looking at a starting price of approximately $299 for the entry level model. “We look forward to confirming more details later this year,” he said.

Unlike Apple’s iPad device, Samsung’s readers use electronic ink displays — a format that is designed to be easy on the eyes for long reading spells and without additional lighting. Rival readers like the Amazon Kindle also use the e-ink format, but the iPad, which is slated to hit Australia in late April, uses a traditional LCD display.

The Samsung models range from a 5″ screen up to a 10″, and have various levels of features in between. Unlike many e-readers, they utilise a stylus pen for interacting with the touchscreen.

In the US, Samsung has announced that its e-readers will be able to access the ebook library belonging to bookseller Barnes & Noble. However, it remains unclear whether the Barnes & Noble content will be available in Australia — the retailer has not historically had a presence Down Under.

The Samsung news comes as the e-reader category is heating up dramatically in Australia, with major players such as the Amazon Kindle entering late last year and the iPad expected to cause a stir in late April.

Existing players such as Dymocks and BeBook have had local offerings for some time, and Sony may also be eyeing the Australian market, although the company has noted it wants to ensure there is enough content on its devices to keep readers satisfied.