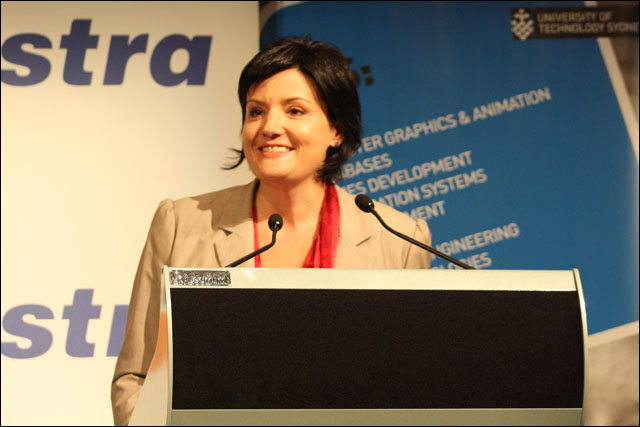 Hundreds of women in Australia’s technology industry gathered in Sydney today to celebrate International Women’s Day and pass on hard-won lessons from the front lines working in a sector which continues to be dominated by men.

NSW MP Jodie McKay (pictured), who among other portfolio responsibilities is the state’s Minister for Women, told a lunch held by Females in Information Technology and Telecommunications (FITT) at the Four Seasons Hotel that “worrying declines” had appeared in terms of women’s representation in Australia’s ICT workforce and in the ranks of those studying to join it.

Only one in five Australians studying to work in ICT was a woman, she said, and that number had been in decline since 2000. Although the industry as a whole was growing, she added, women were under-represented — and the proportion of women in the workforce had not kept pace with that industry growth. Only 15.2 percent of Australia’s ICT industry workers were women — a drop of almost 4 percent compared with figures from 1996.

Furthermore, McKay said, inequity in gender pay remained an issue — she said on average women employed in the industry full-time earned more than $300 per week less than men. And male pay packets were growing at a faster rate than those of women.

McKay said it was important that women work to support each other to achieve a level of representation that more accurately reflected societal make-up, and that the barriers that women faced in the industry be acknowledged.

However, it wasn’t all bad news for the assembled crowd — composed of women from across the industry, including whole tables of women from industry heavyweights Telstra, Optus, SAP, Oracle, Microsoft and more. In fact, the mood in the room was one of positivity, with the room applauding when McKay or later speakers made a salient point, and breaking into laughter and cheers when reminded of common issues faced by women.

McKay pointed out that NSW’s chief scientist Mary O’Kane had earned one of the earliest PhDs in computer science in Australia, and was the first female dean of an IT faculty in Australia.

Later on at the event, Shiff, as well as former communications and IT minister Helen Coonan and MP for Goulburn and former Sex Discrimination Commissioner Pru Goward took questions from the crowd about the challenges they had faced as women successfully rising through the ranks in tough careers.

Coonan said she thought you had to be very bold in business to be noticed — it was easy to fall victim to the syndrome of “sticky steps”, where male counterparts whizzed by women on the career ladder.

She also noted women sometimes had to make “cruel choices” about their families. “If you want to make it to a middle-ranking executive or a backbencher … you can probably have three kids,” she said. “But if you want to go to the top, it may mean you will have to make some choices about your personal life that you may not want to make.”

“There’s no point in coming to this group and not being honest.”

Shiff said many women didn’t speak up for themselves – only for other people. “Just go for it,” she said. “Your male colleagues are not so inhibited.”

Asked how being “blonde and attractive” had affected her career, Coonan said she didn’t think it hurt you to be underestimated. “People make assumptions about people who are blonde, and about women, and about age – a whole lot of things that aren’t bourne out,” she said.

All the panelists agreed it had been tough balancing work and life priorities – with one key aspect to doing it successfully being finding a good partner. Goward noted it was important for both partners to have a “really honest discussion about responsibilities”.

She said women tended to get caught up in worrying about housework — it was somewhat of an addiction. “I think it’s the alcohol in the spray and wipe,” she lauighed, noting it was important to let go of the need for the family home to be spotless.

Coonan agreed – noting a bit of “benign neglect” didn’t hurt. Her 17-year-old son had told her not to worry about it, she said, telling her: “Don’t worry Mum, anyone can make a sandwich”.