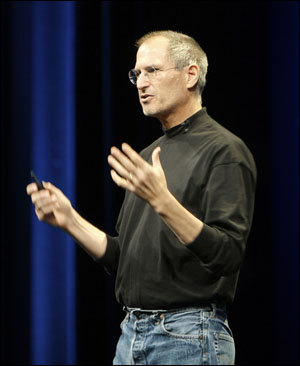 I hope you are well and that you are gaining weight rapidly. In Australia we were really worried about Apple while you were having your operation last year — it was a period of great uncertainty for us all.

I even called one of the reporters from the Wall Street Journal to ask him whether he had any inside goss on how you were going. He said you had said that he wasn’t allowed to write any articles about the situation or talk to people about it. He said that was OK, but I could tell he was a little bit bummed about you being sick as well.

Anyway, I just wanted to write you a letter because I’ve got a few things weighing on my mind.

Firstly, I wanted to thank you for that nice letter you sent everyone last week letting them know Australia would be getting your “magical and revolutionary” new iPad devices in late April. It was nice that you didn’t include any local pricing information about the “magical and revolutionary” iPads. It takes all of the worry out of it for Australians.

Because we don’t know much the “magical and revolutionary” iPads will cost, we can go to the Apple store on the day they go on sale and just pay the price that you set, without having to budget for it.

My wife asked me the other day how much iPads would cost in Australia. “Don’t worry,” I said. “Just let Steve handle it. Steve knows what’s best.”

If I were you, I would take the price that you set for the iPad in the US and multiply it by at least two — that would allow for the difference between the US and Australian dollars, as well as the cost to ship the iPads to Australia. And maybe add on $200 or $300 so that Apple makes some profit out of the iPads. I mean, you can’t expect Australians to get their iPads virtually for free!

It’s kinda like that time you started selling the iPhone in Australia, and nobody knew how much that would cost either. But lots of people still bought them.

You didn’t say whether the iPhone would be sold from the Apple store or just from telcos like Telstra and Optus. But that was OK, because it meant people didn’t have to line-up overnight in the cold. Some people did anyway, but they must not have understood that you were telling us just to relax and stop “thinking”.

By the way, Optus sold a lot of the iPhones, but I don’t think they had much of a profit margin on them. That was a good move, Steve. You don’t want to let the telcos start thinking it’s “their” iPhone. They need to realise they are just like retail outlets for Apple devices. Like AT&T in the US.

Secondly, I wanted to alert you that your “reality distortion field” that works so well overseas has recently been having some trouble in Australia. I heard these two guys discussing Apple at a conference the other day. I think they were Windows users, and even worse, they were journalists.

Anyway, some Australians have been saying that they don’t understand why the iPad is launching in Australia after the US. They say since the iPads are made by Foxconn in Taiwan, why can’t Apple just drop a few pallets off in Australia on the way to shipping the rest to the US? It’s on the way, after all.

Steve, I couldn’t believe that these guys would say this. Don’t they trust you to know what’s best for us? It’s exactly the same situation with the way that you can’t download those “sexy” applications from the iTunes Store.

Lots of people complain about not being able to download “sexy” applications from the iTunes store as well. But that is the problem with the internet. There are way too many “sexy” websites out there. I appreciate what you are doing to make sure we don’t fall to temptation and look at “sexy” iPhone applications, Steve.

I mean, we all like to get “sexy” sometimes. But it’s not appropriate to look at “sexy” material on an iPhone. Everyone should be able to understand that.

But some people just don’t trust you. You can see why I believe the “reality distortion field” is slipping.
I think you really need to do something about this. I mean, I wouldn’t come to Australia yourself. Or if you do, make sure not to tell the Australian journalists about it — you know what they’re like. But we don’t have Engadget in Australia, so maybe it might be OK. But we have Gizmodo.

Maybe you should send Tim Cook over for a while, just to smooth things over and make sure Tony King has things in control. Maybe he was drinking a VB in the server room and the device that projects the “reality distortion field” got a little jolted? It can happen. You just need to make sure it’s OK and still works properly.

You know what these mid-level executives are like. You can’t rely on them. Look at what happened with Gil Amelio — that was a disaster in action. I’m glad you came back to sort it out.

Anyway Steve, again, I hope you are well, and I look forward to buying a “magical and revolutionary” iPad in late April.