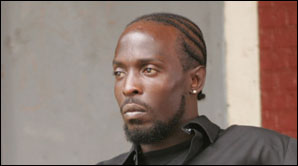 opinion It came to me the other night, when I was watching an episode of that excellent TV show The Wire, that the particulars of the drug trade it focuses on are very similar to that of the online copyright infringement struggle.

In both cases, you have a category of users who are highly addicted to a tightly controlled commodity. In The Wire’s gritty Baltimore streets, it’s dope, coke, sex, and whatever else is going around at the time. In loungerooms around Australia, users are desperately passing around the latest episode of FlashForward, Lost, or even Avatar to get their fix.

Similar too, are the extremes to which enforcement authorities go in order to get a wiretap on the communications devices of their respective junkies. Although probably far too many Australian file sharers talk on the phone about their illegal habits.

Now, the analogy only goes so far. For example, I’d have a lot of difficulty comparing Neil Gane, the executive director of the Australian Federation Against Copyright Theft (AFACT) to that bastard detective Jimmy McNulty, despite Gane’s admittable tenacity when it comes to pursuing the case against file sharers.

And it’s even harder to imagine iiNet chief Michael Malone as a behind-the-scenes mastermind shuffling money around like the nefarious Stringer Bell, although Malone does sometimes seem to have a hint of Bell’s calm demeanour in a crisis, and like the kingpin druglords, Australia’s ISPs are undisputably making money from users’ habits — in their case through the daily terabytes of pirate data coursing through their networks.

The degree to which the ISPs are or should policing what that data consists of is the very debate at the heart of the case.

But this morning’s announcement that AFACT would appeal its losing verdict in its long-running court case against iiNet only strengthens the bond between the two narratives.

You see, I didn’t expect AFACT to appeal the case this morning.

I thought, like The Wire’s Major Colvin, the film and movie studios involved in the case would decide they had had enough of their never-ending war against addiction — a war that many people believe they cannot win unless they provide a rival commercial (and legal) model in the mould that the music industry has found with Apple’s iTunes and even the legal sale of MP3 files.

Colvin, in The Wire, is a thirty-year police veteran who decides to virtually legalise the drug trade in a small section of his jurisdiction — without the knowledge of his superiors — in order to draw the dealers, the gun deaths, the junkies and the prostitutes away from the rest of the area.

I haven’t seen the outcome yet, so I don’t know whether Colvin’s little social experiment will succeed or fail, although clearly Apple and the music studios are currently cashing in on iTunes’ success.

But I do know that after listening to Justice Cowdroy’s conclusive judgement for iiNet and reading his reasons and the ongoing follow-up commentary on why AFACT lost, I had thought the studios would abandon iiNet as a lost cause and either go after the end users themselves, or take Malone up on his offer and start talking turkey on legal options.

Instead, they appear to have taken Cowdroy’s shotgun verdict to the head as little more than a flesh wound, and like any good police force, have waded back into the street corner fight with all guns blazing. And why not? For the content providers, the costs involved in the case (iiNet has so far spent $3.7 million) must amount to little more than pocket change.