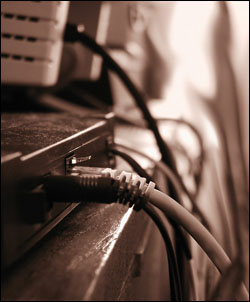 The Federal Government has left the door open for the National Broadband Network Company to supply services directly to government agencies in a move that runs contrary to its stated aim for the company only to provide wholesale services.

Communications Minister Stephen Conroy yesterday released two pieces of ‘exposure’ draft legislation which he said would establish a regulatory framework for the NBN Co, saying the bills delivered on the Rudd Government’s “commitment to change the competitive dynamics of the telecommunications sector by ensuring NBN Co will operate as a wholesale-only company, offering open and equivalent access.”

However, in an explanatory note to the memorandum, the Government noted the Communications Minister of the day may override the wholesale-only rule, although they would have to consult with the national competition regulator before doing so.

Currently, government agencies are substantial purchasers of telecommunications services from large telcos such as Telstra, Optus, AAPT and Macquarie Telecom, with some deals ranging into the tens or even, in rare cases, the hundreds of millions of dollars.

For example, the Federal Government is currently seeking to establish a new whole of government telecommunications procurement panel, which is scheduled to go live over the next several years.

However, the Government has placed other restrictions on the NBN Co designed to ensure its wholesale-only nature. For example, if the NBN Co were to acquire other businesses that had retail operations, it must divest itself of those retail aspects of its purchases.

And the NBN Co will also not be able to supply any content services — even of a wholesale nature. This would rule the NBN Co out of partnering with any media companies and bundling such an offering as a wholesale product to its retail customers.

Price differentiation
Separately, the legislation notes also answered one significant question retail internet service providers have had about the NBN Co — whether it will be able to offer volume discount prices for larger orders. It will.

The explanatory notes state that although the NBN Co must not unfairly discriminate between those seeking to access its wholesale services, it will still be able to negotiate with them. The explanatory document states that “in certain circumstances, differentiation on price and/or non-price aspects can aid efficiency, innovation and investment”.

The documents not that the concept of “efficiency” can be used to facilitate normal business negotiation such as “offering volume-based discounts”.

The carriers who would benefit most from volume discounting would likely be those with the largest existing customer bases — in order words, market leaders like Telstra, Optus, AAPT, iiNet and TPG. The Government and the NBN Co are currently known to be negotiating directly with Telstra over the terms on which (among other matters) the telco would gradually attempt to migrate the customers currently on its own network across to that of the NBN Co (using the NBN Co’s wholesale services).

However, the legislation also states that if the NBN Co enters into a non-standard agreement with a telco, that it must publish the terms of that agreement on its website within seven days of it being entered into.

“The requirement to publish a statement is intended to promote transparency, which is a fundamental bulwark of equivalence,” the explanatory documents state, although they also note NBN Co will not be required to publish the entirety of non-standard agreements as this could reveal commercial-in-confidence information belonging to the access seeker.