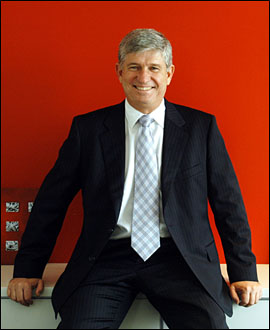 Long-time Unwired chief executive David Spence (pictured) will hand over responsibility for the Unwired business to the chief executive of Seven telecommunications stablemate vividwireless, Martin Mercer, and will leave the group.

Seven group chairman Ryan Stokes said in a media release this afternoon that the company would move to a new operational structure as it neared the completion of its network in Perth and the launch of its new vividwireless wireless telco.

“The vividwireless business in Perth and the metropolitan extensions in other mainland capitals will be the major part of our business, and it is appropriate to consolidate the businesses under the vividwireless CEO,” he said. The statement did not make clear whether Spence would leave Unwired and Seven, however it is understood he will.

Stokes said he wanted to acknowledge the “fabulous job” that Spence had done, both in operating the original Unwired business, as well as developing plans for the vividwireless 4G network.

Spence had led Unwired since 2004, and through its acquisition by Seven, and was seen for that time as the main face of the company, which had been seen as a strong challenger to the fixed line broadband players. However, Unwired’s pre-WiMAX technology is facing strong competition by the rapid development of 3G broadband networks by traditional mobile carriers Telstra, VHA and Optus.

Spence was previously the chief operating officer of ISP Ozemail.