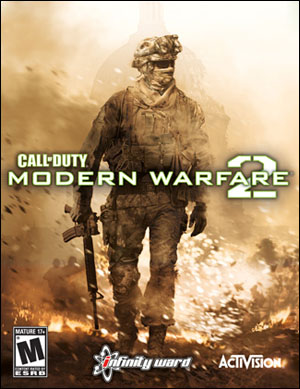 I thought I would write you a letter as I am midway through your excellent computer video game “Modern Warfare 2”.

I have two reasons for writing this letter. Firstly, I wish to inform you that I find this game highly satisfactory in almost all regards. The graphics are very realistic, the gameplay is enjoyable, and you’ve even thrown in some ethical dilemmas to make me really think about things.

I particularly like your attention to detail; for example the way you can be killed by a bursting fire hydrant or survive jumping off a cliff by landing on a mattress. That is really cool!

However, the second reason that I am writing to you is to let you know that I have been bothered by a glaring omission in the game that has spoiled the experience somewhat for me. No, don’t get me wrong! Unlike most console ports the game runs just fine on my PC, certainly at a frame rate that puts Fallout 3 to shame; I have no complaints in that regard.

However, I’m not sure if you realized that you neglected to put a single Australian character in the game so far.

Maybe off to the side smoking a cigarette with a can that kinda looked like it might have been VB (although a lot of us drink other beers these days, for example Coopers Pale Ale or Crownies).

There are two reasons why it should be obvious that you should put an Australian character in your next game, which will probably be entitled “Modern Warfare 3”, although I’m not sure if you’ll put “Call of Duty” before it again, as this seemed you weren’t sure about that this time.

However, if “Chips” really was from Dubbo, you can understand him wanting to be a space marine or whatever, because Dubbo is a pretty boring place to live. If he had been called “Chips BrisVegas” or “Chips Byron Bay” it would certainly have jazzed up his image a fair bit.

So you wouldn’t want Bungie to be cooler than you with their “Chips Dubbo” stunt, would you?

A good name would be something ocker like “Dazza”, because that’s pretty Australian, or even better, “Budgie”, which kinda says to my mind that he likes to take the piss.

Secondly, and more seriously, Infinity Ward, did you realize that actually the Australian special forces unit, the Special Air Service Regiment, is not only based off the British one of the same name, but has a history that makes it clear that it is pretty hardcore?

According to this Mark Dodd fellow, who writes for a newspaper so Australian it is even called “The Australian”, the Australian SAS dates back to 1947 and has been involved in some pretty amazing stuff.

For example, (and bear in mind this is Wikipedia, so it may not be that accurate, as you know there are some internet nerds out there who like to change things on it), apparently the Australian SAS, when it served in Vietnam in the 1960’s with the help of some Kiwis, killed at least 492 and maybe as many as 598 enemy troops, losing only two men killed in action and earning the nickname “phantoms of the jungle”.

I’m not sure how the real Phantom would feel about that, but I don’t think he lives in Vietnam, so there may not be too much confusion and it may be OK.

Since then the Australian SAS has been involved in many other activities in global hotspots like Cambodia, Afghanistan, Kuwait, Iraq and so on. Exactly the sort of locations that you like to feature in your excellent “Modern Warfare” video computer games.

So you can see what I am getting to here, Infinity Ward. I would like to humbly request that you include an Australian in the next game, which as I have mentioned will likely be called something like “Modern Warfare 3”.

A good spot to put him would be with the British troops – Australians and British get on well together. Or, if he has to go in with the Yanks, make sure he trash-talks them a little and pays out how weak their beer is, as these are favourite past-times of Australians talking to Americans. He can go out for a beer with the British – but he has to mention how crap it is that you can’t get a cold beer in England as they like to drink their beer warm.

If he’s in a tough spot, for example if a nuclear bomb goes off in the distance, make sure he says something like “crikey” or “bugger me” to express his astonishment at such an unexpected event. Or you might like him to say something like “pig’s ass” when MacTavish tries to give him a bogus order sometime.

Finally, make sure not to call any Australian you put in Modern Warfare 3 something like “Chips Dubbo”. A good name would be something ocker like “Dazza”, because that’s pretty Australian, or even better, “Budgie”, which kinda says he likes to take the piss. If you really want to play up the Australian angle you could call him “Digger” which is local slang for “soldier”, but that’s probably coming on a bit strong.

Australia is very multicultural, so the last name won’t matter too much, as long as it’s not something too obvious like “Perth” or “Wagga Wagga”.

Anyway Infinity Ward, thanks for taking this into account, and I expect to see an Australian character in the next “Modern Warfare” game.