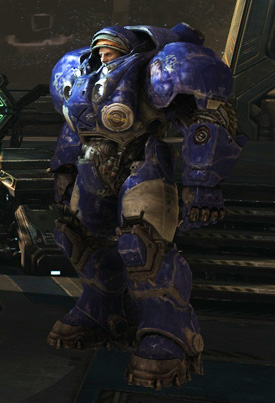 I hope everyone out there at your studios in California is well and not too bummed that you kinda got beat to Diablo 3 by some of the old guys that made Diablo 2 but don’t work with you guys any more.

I know Torchlight isn’t quite as good as Diablo 3 is going to be, but it came out earlier and has some similar special effects. Plus your dog can go back to town and sell your loot — is that going to be a feature in Diablo 3? I hope so. You guys could learn a lot from Torchlight.

Anyway, I wanted to write you a brief letter thanking you for giving me access to the StarCraft II beta early and also ask you a few questions about the game.

Firstly, I have noticed that not many Australians have access to the beta so far. I know this because whenever I start playing a game against someone, they normally say something like “GLHF”.

Blizzard, “GLHF” is not really a typical greeting in Australia. Instead, people usually say something like “g’day mate”, “hey, what’s up?” or even “how’s it hanging?”. So the first time someone said “GLHF” to me when a StarCraft II match started, I thought they were having a go or taking the piss out of me, so I replied: “Stop flogging your log, boofhead.”

As you know, Blizzard, Australians like to use “slang” to keep our American friends from really understanding what we are saying. We feel affectionate towards Americans, being good neighbours and all, but we like taking the piss a lot too — especially when a “seppo” is involved.

I mean “boofhead” isn’t really that much of an insult, I actually call my friends “boofhead” occasionally as a term of affection, but in this case I felt I was being insulted, so I had to respond appropriately.

Soon after I began playing StarCraft II against this guy that I had labelled a “boofhead”, it became apparent that he was an absolute “n00b”, which I believe is a cross-cultural term. He attempted to send a number of Hellions (which are those little dune buggy things) against my base, which was (d’uh) walled off with a ‘racks and two supply depots.

Of course my marauders and marines easily took care of that little problem, upon which I asked him if he’d had “a little bingle”. Blizzard, I don’t think this “boofhead” knew what I was saying, because he said that his hellion strategy had worked against another guy earlier.

If he was Australian, he would have understood that the appropriate response to my insult “taking the piss” out of his strategy would be to call me a “worthless galah” or something similar, as well as maybe a “lazy shit” for sitting inside my base and not moving out against him.

It was a similar situation later on that night, Blizzard, when I beat another “boofhead” who told me afterwards that it was 7AM where he was (no doubt in America) and that he had been up all night playing your excellent StarCraft II beta game.

I then accused him of being a “dole bludger” — didn’t he have a job? To which he responded that he voted for Clinton. Obviously he had no idea what I was talking about, although he did agree to have another game with me.

Halfway through that second game, Blizzard, he actually quit because he did have to go to work and the game had been going on for a while. I then had to call him a “piker”, which again he didn’t understand because he wished me a “gg”, which I understand means “good game”.

Why would you thank someone for a good game when you piked halfway through?

Anyway Blizzard, I have one more thing I wanted to tell you about. As with Modern Warfare 2, there is only one problem with StarCraft II, apart from the “boofheads”, “dole bludgers” and “pikers” who are playing it.

That is the fact that there are no Australian characters in the game. I sometimes think that Kerrigan is Australian because she’s a “right beaut sheila” and we have some of those here on “Bondi Beach” too, although she does chuck a dummy spit sometimes and yabber on, but then I heard that she wasn’t actually Australian.

It’s obvious that some of the things in StarCraft II, Blizzard, are just there because you think they’re cool. Like the infected Terran that the Infestor can spawn. To be honest, Blizzard, that ability is as useless as tits on a bull!

So, Blizzard, I suggest that you need to put at least one character in StarCraft II with an Australian accent. The Protoss seem a bit up themselves and the Zerg are quite weird, so it would have to be a Terran character. Actually, Blizzard, seeing as we have the Woomera space station thing outback, maybe you could make it so that the Terran sensor tower is Australian?

To make it proper you would need to have it say something like all of your characters do when you click on them. The first few times you click on the Australian sensor tower, Blizzard, it should say nothing, so that those people who are less persistent than most Australians are wouldn’t realise there was a guy in there with a six-pack monitoring Terran airspace.

After about five clicks though, maybe you could have it say “fair suck of the sav!” Next click it could say something like “grouse”. Then after that it would say, sequentially, “ridgy-didge”, “let’s hit the turps!”, “piece of piss” and “little ripper”, all in an Australian accent.

You could also add in “fair dinkum” somewhere, but that might be too stereotypical. You don’t want people to think that Australians all say “fair dinkum” all the time.

Anyway Blizzard, thanks for reading my letter, and I look forward to playing StarCraft II tonight, hopefully there will be more Australians on and they will understand what I am saying. In the meantime, keep on working on Diablo 3. I especially like the Barbarian character so far, he looks like the Destroyer from Torchlight.

PS Blizzard, can you please make sure this guy from Brisvegas, blahjedi, gets a beta key? You can see from his profile picture that he’s a right royal Aussie — he’s holding a beer and has a beard. Plus he’s a basketball referee so he’s obviously fair-minded and won’t cheat by cheesing n00bs with proxy gateways.