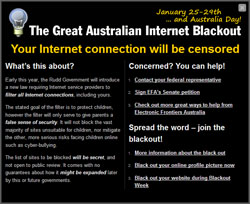 Over 500 Australian web sites will modify their design starting from Australia Day to include a black aesthetic and protest message against the Federal Government’s internet filtering scheme, according to Electronic Frontiers Australia.

Organisations like internet service provider iiNet and the Greens party have committed to taking part in the protest, which was conceived by long-time Linux and open source community member Jeff Waugh and dubbed ‘The Great Australian Internet Blackout’.

Greens broadband spokesperson Senator Scott Ludlam said he was proud to be part of the week-long action.

“The government’s plan will not protect children, will do nothing to crack down on criminal activity online, and sets a dangerous precedent of centralised net censorship,” Ludlam said in a statement. “Communications Minister Stephen Conroy should start paying attention to the almost universal condemnation of this scheme and pursue alternatives rather than pushing ahead with the mandatory filter.”

“The idea that the Government will be inserting itself in every internet connection in the country is a tough one to swallow, especially without a workable policy goal behind it.”

The blackout campaign is also encouraging Twitter and Facebook users to black out their avatar on the popular social networking services, and contact members of parliament to express concern. According to the initiative’s site, more than 1,500 Twitter users have already done so.

The site has also published a growing list of sites (more than 300 at last count) which have linked to the Great Australian Blackout site or are using its javascript code to effect the blackout.

The protest mirrors a similar initiative held in New Zealand early in 2009 which protested against amendments to the country’s Copyright Act that would see alleged online copyright infringers lose their internet connection.