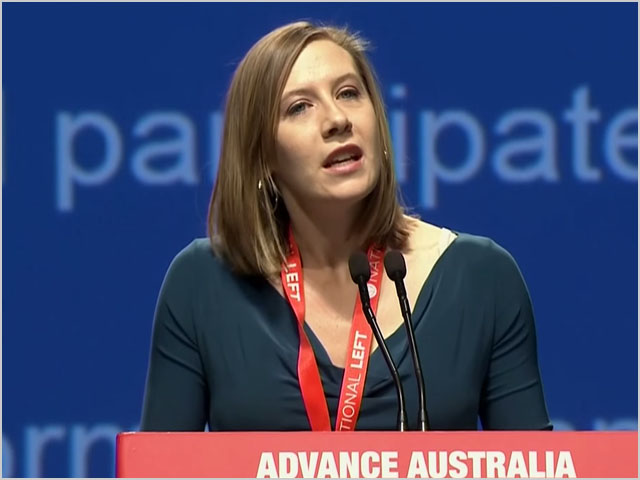 news The Australian Labor Party passed a motion at its National Conference on Friday that will see it formally review the Data Retention legislation passed earlier this year, adding to an existing planned review enshrined in the legislation itself.

Haylen has strong connections with Labor’s left wing, having worked as director of administration for former Prime Minister Julia Gillard and as deputy chief of staff for former Deputy Prime Minister Anthony Albanese. Haylen holds the seat of Summer Hill — in Sydney’s progressive inner west — in the NSW Legislative Assembly and is a former Mayor of Marrickville. These areas are part of Albanese’s federal seat of Grayndler.

At Labor’s National Conference in Melbourne on Friday, Haylen made it plain she didn’t believe Labor had gotten the balance right when voting for the Data Retention legislation earlier this year. The MP’s full speech is available online.

“Proponents of metadata retention say those who do nothing wrong have nothing to fear, but these laws help create a culture of fear. A culture where we are all under suspicion and subject to heightened mass surveillance. Where some government agencies don’t require a warrant to investigate alleged wrongdoing.”

“This amendment commits us to review these laws and – I hope – find a better balance.”

Haylen said Labor was the “only party” that can get this balance between security and privacy right.

The amendment comes despite the fact that the data retention legislation itself already contains a mandatory review within three years after it is implemented by the Parliament’s Joint Committee on Intelligence and Security — which only Labor and the Coalition sit on.

However, Labor’s membership on the Committee is currently dominated by Labor figures who are typically hard-line on national security matters and/or members of Labor’s right-wing faction, including Anthony Byrne, member of the ALP Caucus Committee on Security and Defence, Shadow Attorney-General Mark Dreyfus and Shadow Defence Minister Senator Stephen Conroy. Labor’s representation on the committee is somewhat balanced out by left-aligned Senators Penny Wong and Katy Gallagher, but neither have demonstrated a strong interest in the data retention debate.

The news attracted criticism from the Greens, with Senator Scott Ludlam stating on Twitter that it was too late for Labor to “reinvent Data Retention history”, as the party had already voted for the policy:

too late to try and reinvent #DataRetention history, labor: you already voted for it: http://t.co/8aYgz8BS1W #auspol pic.twitter.com/T8w1Fs4LJI

And former Internode and iiNet senior executive John Lindsay wrote on his blog: “You can’t have it both ways Labor. Reports that you’re “rethinking” Data Retention mean you’ve worked out your supporter base doesn’t actually like surveillance. You unquestioningly supported it in spite of the evidence put in front of you by experts. So now it’s yours. You made it. You didn’t OPPOSE it, so you get no credit for opposing it now. Future performance is predicted by past behaviour – remember that at the ballot box voters.”

opinion/analysis
These amendments demonstrate that there continues to be strong concern within Labor’s left-wing faction regarding the controversial Data Retention amendments which Labor teamed up with the Government to pass earlier this year.

When you consider the fact that elements of the Labor right — for example, Ed Husic, who has long been associated with the NSW Labor Right — continue to demonstrate concern about the legislation — this means there is substantial opportunity for the legislation to be amended in future to place further restrictions on it. This will especially become a possibility if Labor wins Government and the Greens, who are staunchly against data retention, hold the balance of power in the Senate, or if Senator Leyonhjelm or Senator Xenophon, who also hold strong concerns, are in the mix for the balance of power.

The amendments also appear to represent an attempt by the Labor left to reassure its own constituency over the issue.

No doubt this high Greens vote would make Haylen extremely nervous about the potential of issues such as Data Retention — which the Greens have been strong on — to impact on the Greens vote in her seat, especially considering the Greens picked up the neighbouring seat of Newtown in the same election.

I don’t personally expect Haylen to lose her seat to a Greens candidate any time soon — she’s young, energetic, and I think the Greens will most likely concentrate on holding what they have in NSW and federally for now. Haylen has a pretty clear margin, high-profile allies, and appears to have a strong history in the area. But the possibility of a strong challenge is still there if the MP doesn’t continue make the right noises on issues like Data Retention to her progressive Sydney voter base.

I haven’t met Haylen, but she looks like a solid MP, and I expect she will continue to attract national attention and support if she pushes this issue further. From the public statements she’s made on a few issues, I suspect she will align pretty well with Australia’s technology community on a few policy issues. And eventually she may be a candidate for Federal Parliament. Definitely a MP to keep an eye on.

From the perspective of Australia’s technology community, it’s great to see the Labor left showing some energy on Data Retention, and that the issue received support from the party’s National Conference. It shows that the issue is not dead yet, and indeed will continue to attract attention as the policy is implemented, used by law enforcement and eventually reviewed.

Image credit: Screenshot of footage taken by the Labor Herald