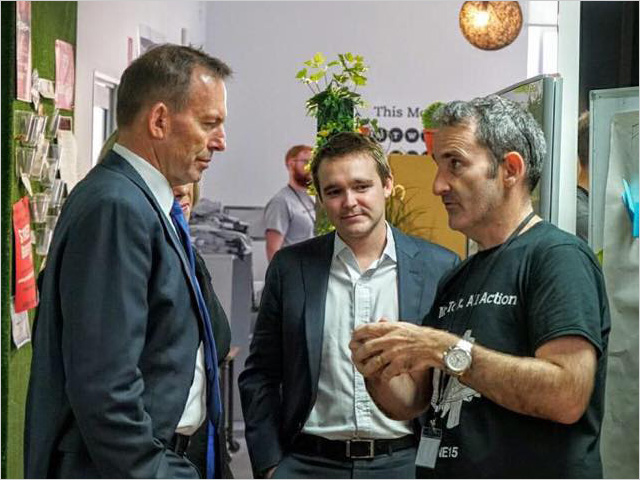 blog Those who pay attention to Question Time in the House of Representatives (I know) may recall an incident a few months back where our formidable Prime Minister appeared to link teaching primary school kids programming skills to sending them out to work in the salt mines at the tender age of 11. Now, Mr Abbott quickly backtracked into a fairly acceptable view on the issue, but there is no doubt concerns remain out there about the genuineness of the PM’s underlying opinion on this topic.

My guess is our redoubtable leader has clawed at least some credibility back with his visit to Startup Weekend Brisbane, hosted at the city’s River City Labs over the weekend, accompanied by young political innovator Wyatt Roy. The gentleman in the picture buttonholing Abbott here (pictures courtesy of Roy’s Facebook page) is none other than River City Labs’ Steve Baxter, one of Australia’s all-time greatest tech entrepreneurs and a notoriously tough-minded “shark” from Ten’s Shark Tank series. And if you look carefully at the other shots you can see a couple of blurrycams of LNP Member for Brisbane Teresa Gambaro.

Wyatt Roy == disruptor. Big thanks for bringing the PM @TonyAbbottMHR to @RiverCityLabs for #SWBNE15. Now we need good policy.

And StartupQld has more photos:

Abbott also leveraged attendance at the event into his speech at the Queensland LNP State Convention over the weekend, telling the faithful:

“Today, I just want to close these observations by telling you of the experience that Wyatt Roy and Teresa Gambaro and I have just had at River City Labs. River City Labs is a place where the smartest and the bravest and the most adventurous young entrepreneurs come together to talk about ideas, to challenge each other, to share ideas, to work out what they think can actually succeed, and then to make it happen.

And I can tell you, exciting though it was to watch that contest on the football field during the week, it’s in places like River City Labs that the battle for our future is being won. That is where the future of our country is being secured, by our best and our brightest coming together to test each other, to stretch each other and to make it happen – and I want to say how proud I am to see that so many good things are happening in this great state of Queensland.

That is the mission of this Government: to help every single Australian to be the very best that he or she could be.”

It’s pretty hard to disagree with Abbott’s overall sentiments here regarding entrepreneurship and Australians becoming the best they can be, especially when they relate to the technology sector. However, I suspect more than a few readers may disagree upon the specific policy approaches the Government should take to help us get there.