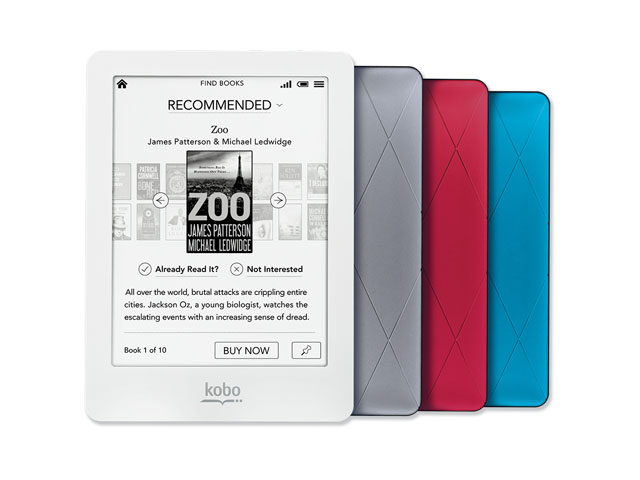 review eBook company Kobo recent debuted a handful of new models in its eReader line of the same line. We recently had the chance to test out two: the Kobo Mini, a small eReader designed to fit in a pocket, and the Kobo Glo, which comes with a built-in lamp for reading at night. But do these new models stack up well against the best the eReader market has to offer? Read on to find out.

Note: Some of this review will be similar to our review in late September of the Kobo Touch eReader, as many of the same features and functionality have made it across from that model to the new Glo and Mini models. This is a very good thing — as we really liked the Touch.

Design
We wouldn’t normally review two products in one article, but to be honest, the Kobo Mini and Glo are so similar in design that we thought we’d bundle both into the one review, to make it easier for readers to get across both.

Both eReaders are basically flat, light slabs of plastic with e-ink touchscreens surrounded by either white or black hard plastic, and with a leathery plastic back that makes it easy to grip them. Both have a microUSB port on the bottom for charging and synching with a PC, and an on/off switch on the top. The Glo has an additional small button next to the on/off switch that is used for turning on its nightlight, as well as a slot for a microSD card.

The other main design difference between the two is the size. The Mini is the smallest eReader we’ve ever seen, coming in at 102 x 133 x 10mm (that’s just, about 10cm by 13cm!). It weighs 135g — despite its size, about the same weight as most high-end smartphones. It really can fit fairly easily in many pockets, including the back of jeans pockets. The Glo is more of a regularly sized eReader, although it’s a little smaller than we’re used to. It comes in at 114 x 157 x 10 mm, and weighs 185g.

We’d describe the design of both as fairly standard for eReaders — there’s nothing remarkable or flashy here, although the back case of both models –available in a range of colours — is nice and grippy.

Features
The Kobo Mini is powered by an 800MHz processor (not that CPU speeds really matter much for eReaders, apart from how power-efficient they are), and its touchscreen is a 5″ e-ink model that can render 16 levels of gray-scale. It supports the 802.11 b/g/n Wi-Fi standards and has a microUSB port for charging and synching. It has 2GB of storage, of which about a gigabyte is available to store content, and its battery is rated as lasting “over 1 month” when the Wi-Fi is turned off.

The Kobo Glo has a little faster processor, at 1GHz, and its touchscreen is a little larger, at 6″, with a resolution of 1024×758. It also has 2GB of storage space with 1GB usable, but it can also take up to 32GB of additional storage through its microSD card. It has the same Wi-Fi and USB connectivity options, and a similar battery life.

Aside from the larger size and addition of a microSD card slot, the other major feature found on the Glo but not the Mini is an in-built light, which illuminates the screen for night-time reading. It comes with a software option which allows you to easily change its brightness through the Glo’s touchscreen, and Kobo says the Glo will last for up to 70 hours of continuous usage with the light on.

The other important feature shared by both Kobo models — and this has been fairly standard for some time across various Kobo models — is the fact that both support quite a few different eBook formats, which some eReaders do not. ePUB, PDF and Mobi formats are supported, as well as the CBZ and CBR comic book formats, and common image and rich text formats as well.

It’s also important here to mention the broader Kobo ecosystem. As with Amazon’s Kindle platform, if you buy eBooks or other content through Kobo, you’re not just buying them to use on one device. You can port them between devices or even read them on your PC, smartphone or third-party tablet through Kobo’s applications. This makes Kobo more than just a gadget company – it’s a whole platform, and the Kobo devices mentioned here are just one window into that platform.

Performance
Let’s deal with the good points first, of which there are many — and then we’ll get onto a few caveats.

As with Amazon’s touch-screen Kindle models, the touchscreen on these two Kobo units is quite responsive, which you don’t really espect in an e-ink model. Menus load quite quickly and switching pages with just a tiny touch of your finger is also quite rapid. Being able to switch pages instead of hitting a physical button decreases the strain on your fingers, which is always a good thing when you read as much as I do.

The screens themselves on both units, like most e-ink screens, are clear and easily readable, with text being crisp and clear in a variety of sizes. The Kobo operating system is quite minimalistic, but does basically what you need – allowing you to find and get new books onto it and to navigate those books – without getting in the way too much.

As expected, we found it very hard to exhaust either batter on these two units. We spent several hours with each reading and the battery bar didn’t decrease even a little. And both were still alive after 2-3 weeks of light use. This is one of the best things about e-ink screens — they use very little power, meaning e-ink eReaders usually stay alive for weeks at a time.

It was also quite quick the two units from a PC or Mac USB port. You can also charge it by plugging its microUSB cable into a generic battery adapter etc — we usually use Apple’s iPad/iPhone chargers with standard microUSB cables for this purpose.

We’ve never really liked Kobo’s PC/Mac synching software, as it’s a little clunky, but it does work at a basic level, and is gradually getting better and more iTunes-like over time. And Kobo’s companion smartphone apps are really quite good these days. Both the Glo and the Mini were very easy to synch with our Windows 7 desktop PC — loading their own drivers in quick-smart fashion and making their USB storage available as a removable drive.

When it comes to the Glo, we really don’t have much negative to say about the unit, apart from the fact that we would like it if its screen was a little larger — we don’t quite understand the need for Kobo to place a centimetre of plastic around the e-ink screen. We’d like to see this cut down, as many smartphone manufacturers have started doing these days. The unit’s nightlight is excellent and we really enjoyed reading in general on this device.

With regards to the Mini, however, we have to say that whether you are interested in this device will really heavily depend on whether you want such a small screen. You really can only fit a few paragraphs on the Mini’s tiny screen, and we actually found it a little annoying reading using this device — due to the fact that we had to flip to the next page every few seconds.

Even for those with very small hands, we can’t help but feel that if you need a dedicated eReader device, you’d simply be better off buying a Kobo or Amazon unit with a larger screen. We know quite a few people with small or frail hands (think: elderly citizens) and we can’t say we’ve ever heard of anyone having a problem lifting the very light e-ink readers which are available on the market today.

If you really do want an eReader that can be slipped into any pocket, why not use your smartphone? Your writer does a huge amount of reading on the bus and (gulp) in bathrooms on his smartphone, and we know plenty of other people who do as well. The Kindle, iBooks and Kobo smartphone apps are excellent and perfect for this purpose. Although you have to put up with an LCD screen, we haven’t found this to be a problem for short reading spells — and for longer ones at home, a larger eReader screen will suit better than the Mini’s tiny one.

If the Mini made better use of its actual physical size — it has the same large plastic border around its screen that the Glo does — then we could see it being more attractive, as its screen size would become a lot more useful. But as it stands, we can’t see this form factor being hugely attractive.

Conclusion
Both the Kobo Glo and the Kobo mini are very solid, capable eReaders which we recommend as strong rivals to Amazon’s dominant Kindle models if you’re looking for an alternative. However, we have to put a question market over the Mini’s physical size — is there really a market for an eReader this small? Why not just use your smartphone instead? We’re sure this question will be answered over the next year or so as the Mini is in-market.

In addition, in a broader sense, the two eReaders they don’t really offer anything that the current Kindles don’t. Personally, due to the dominant size of Amazon’s library, we’ll be keeping our business with Amazon for now. There’s not really any real reason to switch to Kobo, despite the strength of its products. This is the problem with eReading right now. Despite the strength of rival products, if you get locked into a certain ecosystem, you have to be offered a compelling reading to switch.