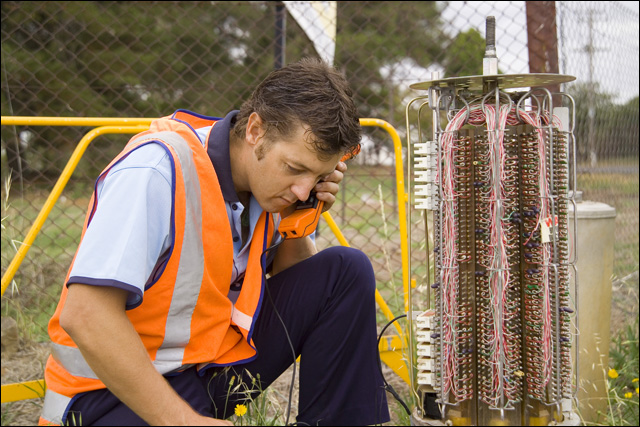 news The nation’s largest telco Telstra has rejected unsubstantiated claims that its copper network was suffering a fault rate of up to 30 percent, pointing out that in October this year, only about 1.3 percent of its telephone lines nationally suffered any kind of fault, and that it invests hundreds of millions of dollars each year keeping it that way.

“Our insider explained how three years ago, when Telstra tendered the process to switch to their own Fibre to the Node scheme it was found that the average network pillar had a 30 per cent failure rate in terms of line faults and lines being listed as connected to the wrong number.” The ABC’s article linked this issue to the Coalition’s NBN policy, which focuses on re-using portions of Telstra’s copper network in a so-called fibre to the node strategy, as opposed to Labor’s fibre to the home-based project.

However, in a statement responding to the ABC’s article, a Telstra spokesperson pointed out that the company’s latest network reliability data showed that one 1.3 percent of its customers had experienced a fault during the most recent reporting period — October this year. In some areas, such as the Sydney central business district, that figure was even lower — as low as 0.58 percent. In addition, Telstra’s statistics also showed that services were available, on average, 99.92 percent of the time.

“Telstra is constantly installing, replacing, repairing and upgrading copper lines throughout its network,” the spokesperson said. “It’s a never ending job and we’ve been at it more or less non-stop for 100 years. Every year we invest hundreds of millions of dollars operating and maintaining our network to ensure our customers are able to enjoy the quality of service they expect. The work installing, replacing, repairing and upgrading copper lines hasn’t stopped as we prepare to progressively migrate our customers onto NBN Co’s Fibre to the Premises Network.”

The Australian Communications and Media Authority, which is responsible for monitoring the performance of telecommunications companies in Australia, praised Telstra’s reliability in its most recent telecommunications performance report for the 2010/11 year (PDF). The regulator wrote: “The monthly percentage of Telstra’s CSG-eligible services that did not experience a fault remains consistently high. In 2010–11, 98.49 per cent of services were fault free on average per month, marginally lower than the previous year.”

“In 2010–11, at a national level, services were available on average for 99.90 per cent of the time each month. Most areas across Australia experienced a very high level of service availability on Telstra’s fixed-line network.”

In addition, NBN Co itself has also publicly commented on the issue. In an article published by iTNews in September last year, Peter Ferris, general manager of design and planning at NBN Co, said Telstra’s copper network suffered more than ten faults per 100 services — a figure far short of the 30 percent rate claimed by the ABC.

The ABC’s new round of criticism of the Coalition’s FTTN-based NBN policy comes just a week after the latest stoush between the broadcaster and Shadow Communications Minister Malcolm Turnbull on the issue. Again quoting industry sources who didn’t want to go on the record with their claims, the ABC’s Technology & Games editor Nick Ross concluded in an article entitled “Huge doubts cast over Coalition’s ‘cheaper’ NBN alternative” that deploying a FTTN network in Australia would be ” an expensive, time-consuming hindrance”, compared with the current FTTH deployment.

Speaking to ABC Radio last week, Turnbull rejected the criticism. “Well that is, with respect to whoever wrote that, complete and utter nonsense,” he said, pointing out that BT in the UK and AT&T in the US were using the FTTN deployment model, and that the FTTN streetside cabinets didn’t need to be the size of “fridges” as they were “getting smaller all the time. The speed of rollout was also demonstrably faster than with FTTH rollouts, Turnbull said, pointing out that in the UK, BT had deployed its FTTN infrastructure to seven million premises in one year alone. Turnbull added that the cost was about a quarter of the cost of the fibre to the home model.

opinion/analysis
So who’s right here? Well, it’s a bit hard to say. To start with, I’m not entirely sure that we’re comparing apples with apples here, given that “fault rate” is a bit of a subjective term. I’m sure Telstra has hundreds of different types of fault rates and hundreds more of other types of measures for tracking the reliability of its copper network; and let’s not forget that it delivers both voice and data over that infrastructure.

On the one hand, many who work in Australia’s technology sector would suspect that there is some basis in fact to what the ABC’s un-named source is claiming. You only need to move house a few times or check out Delimiter’s gallery of “worst of the worst” examples of cabling in Telstra’s copper network to know that there are definitely problems in various places with the network; it is ageing, it is being used for purposes which its original designers never intended it to be used for, and Telstra does need to constantly fix issues. I’ve heard quite a few nightmarish stories from Telstra contractors about the state of the network over the years.

However, to pull out one un-detailed, unsubstantiated fault rate on one area of Telstra’s network and extrapolate that into a claim that Telstra’s copper network is so “rooted” that it would be “completely impractical” to deploy fibre to the node in Australia is just, in my opinion, horse twaddle. The situation is a lot more complex than that in reality, and I think most within Australia’s telecommunications industry would accept that it is indeed possible to roll out a fibre to the node network in Australia and that such a network would indeed deliver a dramatic improvement in basic broadband service delivery to most Australians. Perhaps such a deployment wouldn’t be as easy, quick and cheap as Malcolm Turnbull constantly claims it would be, and perhaps it would be a lot messier than Labor’s elegant FTTH model but it could be done.

If the ABC, or anyone else, wants to make an argument that it would be impractical to upgrade Telstra’s copper network to fibre to the node, they’re going to need to present a whole lot more evidence to prove that claim. Telstra itself still appears to believe that its network could be upgraded to support FTTN; one unsubstantiated claim about fault rates isn’t going to be enough to change many people’s mind that Telstra is wrong about its own network.