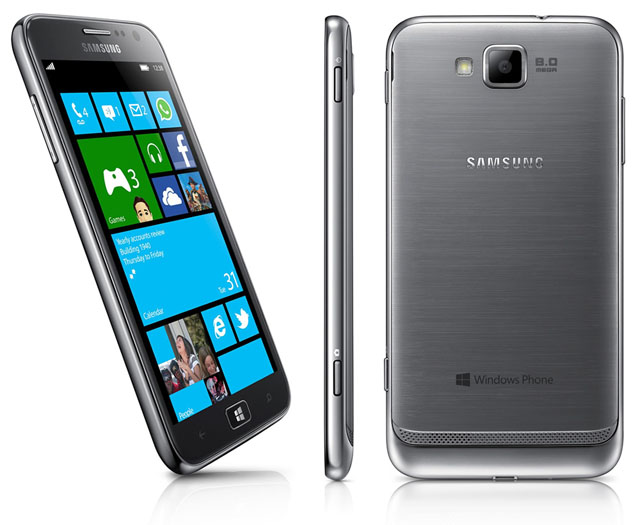 preview Korean manufacturer Samsung is fast becoming the only smartphone company able to go neck and neck with Apple in the smartphone space. But so far its Windows Phone 7-based handsets have failed to make much of a splash. Can the company’s first high-end smartphone based on Windows Phone 8, the ATIV S, vault the upcoming Microsoft platform into the stratosphere? Read on to find out.

Design
We’re used to Windows Phone 7-based smartphones all looking relatively similar (with the exception of Nokia’s fluoro Lumia line) and the ATIV S appears set to continue thos trend rather than breaking it. Samsung appears to have put less design effort into the ATIV S than other hero handsets such as the Galaxy S III, and as a result the ATIV S could have been a smartphone from a number of other manufacturers – HTC, Sony Ericsson, Motorola or LG. It just doesn’t stand out that much.

The front of the device is dominated by the device’s large 4.8” display (the same size as the Galaxy S III), with small, Galaxy S III-like buttons at the bottom of the screen and a small speaker and Samsung logo on top. The back of the ATIV S is brushed aluminium, which looks lovely and smooth, but if past experience is any guide, may be a little bit slippery in the hand. The ATIV S’ camera is in the normal place, and there appears to be a metal rim surrounding the whole phone, which reminds us a little of the design of Apple’s original iPhone and iPhone 3G, or Samsung’s first Galaxy S, which was itself quite similar in design to the first iPhones.

As we’ve come to expect with most smartphone manufacturers these days, there appears to be a standard microUSB port on the ATIV S for synching and charging – it’s on the bottom – and there’s a couple of buttons on the side, which we’re going to assume are for the normal volume, power and perhaps camera functions. We can assume the standard 3.5mm headphone socket is on top, and there’s also what appears to be an additional (and quite large) speaker grill on the back of the ATIV S, towards the bottom. It sounds as if the ATIV S will have better audio capabilities than we’re used to with most smartphones.

Overall, the Samsung ATIV S reminds us quite a lot of a mix between the company’s previous Omnia W handset (which we quite liked) and HTC’s Titan 4G model, both of which run Windows Phone 7. This is a good thing – both handsets received overall positive reviews by Delimiter – but it does mean that the ATIV S might struggle to stand out in a world where Nokia and HTC will introduce Windows Phone 8 handsets in bright and vivid colours beyond silver, grey and black. Of course, Samsung is noted for having stellar build quality, so this may not end up mattering too much.

Features
The ATIV S’ headline features are very strong – it will come with a 4.8” Super AMOLED display made from Corning’s Gorilla Glass 2 material, a 1.5GHz dual-core CPU, 1GB of on-board memory, an eight megapixel rear camer and a 1.9MP front-facing camera. Buyers will be able to choose between 16GB or 32GB models, both of which come with a microSD card slot for storage expansion, and the ATIV S will come with a 2300mAh battery – slightly larger than the Galaxy S III’s 2100mAh battery – already noted as one of the longest lasting in the industry.

All of these features are actually quite standard for modern smartphones – certainly the latest models from HTC and Samsung share most of these features – but we’re pleased to see them replicated on the ATIV S. In addition, it’s important to note that at this point, we’re not sure whether greater technical specifications will actually make smartphones better. Sure, a 16 megapixel camera is theoretically better than an 8 megapixel one, and a quad-core processor is theoretically better than a dual-core one, but will users actually notice these bumps? Not really, in our experience.

One of the key questions for the ATIV S which Samsung has not yet answered is whether the smartphone will come with 4G speeds in Australia. We hope so, and there is reason to suspect that it will, given that Samsung has just launched a 4G version of the Galaxy S III in Australia, but we just don’t know yet. If the ATIV S doesn’t support 4G in Australia when it launches locally, we will be quite disappointed.

The other major new feature which the ATIV S introduces – and one of its key selling points – will be Windows Phone 8, which has not yet been released by Microsoft. Microsoft’s new mobile operating system features a slew of new and long-awaited features, ranging from multi-core CPU support, to a resolution bump (1280×768 or 1280×720), the ability to support microSD cards, NFC chip support, Internet Explorer 10, a Wallet feature for storing debit/credit cards, coupons and boarding passes and better maps and directions (through integration of Nokia’s maps feature). Most of these features were already available through Apple’s iOS and Google’s Android platforms, and Windows Phone users have been waiting them for a long time for the Microsoft platform. We’re very glad to see them arrive.

Performance
We don’t expect to see any real performance issues with the ATIV S, given Samsung’s stellar record at this point and the strength of Windows Phone, but when it’s released we will be checking its battery life, photographic and network speed support to see if they’re up to par. For now, the only real indication we have of the performance of the ATIV S comes from Microsoft’s Windows Phone Blog (not the most objective source of information). Microsoft evangelist Ben Rudolph writes on the blog:

“When designing a handheld device engineers walk a fine line – too light and the device feels cheap, too heavy and it’s cumbersome. Samsung’s ATIV S walks this tightrope with ease; it’s solid but not heavy, and it’s perfectly balanced so your hand doesn’t get fatigued. I’ve been using mine for a few days and not once did I have to do to the “I-need-to-put-this-thing-down-and-shake-out-my-hand-because-my-fingers-are-going-numb” thing.”

“The ATIV S is flat-out beautiful, and it has the guts to match. But what’s impressed me most about the ATIV S is Samsung’s attention to detail. To get to your Start screen, you hit a raised physical Windows button, not a capacitive one. The speaker bar on the front and the back, as well as all of the buttons, are aluminum, not plastic. And the display glass has just the slightest of rounded edges. It all adds up to a device that looks great, feels great, and performs great.”

Conclusion
Samsung hasn’t said yet if or when the ATIV S will launch in Australia, but as the company’s flagship Windows Phone 8 model, we certainly expect it to – and likely before the end of 2012. Of course, Nokia, HTC and others are also preparing similar high-profile devices to support the launch of Windows Phone 8, and some of those have already been announced – such as the Lumia 920, which is looking like a very nice model. But in this pack, if Samsung’s previous build quality is maintained with the ATIV S, we expect this model to be one of the frontrunners. So far, all indications are good, and it will be interesting to get the ATIV S into our hands for testing.