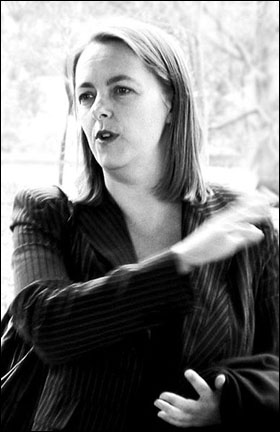 news Prominent network engineer and commentator Mark Newton has accused the Federal Attorney-General’s Department of using the Attorney-General of the day — whether Labor or Coalition — as a front for its long-running data retention and surveillance plans, which he said dated back to the Howard Government.

The Federal Attorney-General’s Department is currently promulgating a package of highly controversial reforms which would see a number of wide-ranging changes made to make it easier for law enforcement and intelligence agencies to monitor what Australians are doing on the Internet. For example, one new power is a data retention protocol which would require ISPs to retain data on their customers’ Internet and telephone activities for up to two years, and changes which would empower agencies to source data on users’ activities on social networking sites. Another power would see it made illegal for Australians to refuse to decrypt their data, and warrants are also to be simplified and streamlined.

Attorney-General Nicola Roxon, who has acted as a spokesperson for the proposed reforms, has appeared to waver back and forth about whether she supports them, making statements from different points of view to the media over the past several months. This morning, Roxon published a letter to the Editor of the Herald Sun newspaper stating that she was “not backing or opposing” any of the proposed reforms.

However, according to network engineer Mark Newton, who has been a vocal commentator on matters of digital rights in Australia over the past several years and who worked as a network engineer at ISP Internode from 1998 through 2011, Roxon’s participation in the debate only hid the real players.

“The document is a wish-list of proposals that have been floating around police forces and Attorney-General’s Department bureaucrats for years,” Newton wrote in a submission (PDF) responding to a discussion paper on the reforms published by the Joint Parliamentary Committee on Intelligence and Security, which is currently holding an inquiry into the issue. “Indeed, the Data Retention proposal discussed herein dates back to the Howard Government.”

Newton wrote that every now and then, departmental bureaucrats would float these kind of data retention and surveillance reforms “up like trial balloons”. Usually, he added. “their proposers judge that the winds aren’t blowing in the right direction, and they pop down again until the next opportunity to try them on. It’s almost as if the proposals’ owners float them every time we swear-in a new Attorney General, just to see if he or she is credulous enough to give them a permissive hearing.”

“To the credit of our previous Attorneys General, the more contentious proposals detailed in the Discussion Paper have been unable to advance,” Newton wrote. “But that doesn’t mean that they’ve gone away. The Department has a longer memory than any of its Ministers, and can rely on the amnesiac effect of the “brain transplant” they receive whenever there’s a change of government or a front bench reshuffle.”

Newton is correct in that a number of the proposals currently being debated have been examined by the Attorney-General’s Department for a number of years.

The data retention component, for example, dates back at least half a decade. In mid-2010, for example, Roxon’s predecessor as Attorney-General, Robert McClelland, was forced to comment on the issue after his department’s data retention plans were controversially leaked to the media. At the time, ISPs involved in the discussions said that the issue had been being debated between the department and the telecommunications industry for several years.

Newton said that Roxon should be praised for bringing the proposals out into the open. “Not only are they now receiving the widespread public scrutiny that they’ve previously been denied, but future Attorneys General will no longer be ignorant of history when they are sworn in, and will be less susceptible to manipulation from their departmental staff,” he wrote.

Newton’s comments that the Attorney-General’s Department has sought to prevent public scrutiny of the data retention proposal in general are accurate.

In mid-2010, for example, the Attorney-General’s Department heavily censored a Freedom of Information request which would have disclosed key details of the proposal. At the time, departmental official Claudia Hernandez wrote that the sections had been blacked out because it could lead to “premature unnecessary debate” and that in addition, she considered that its release would be “contrary to the public interest”.

Greens Communications Spokesperson and Senator Scott Ludlam said in a statement that the excuse was “extraordinary”. “Why is the department making such an effort to keep this information hidden?” he asked.

Later, in October 2010, senior AGD public servants Catherine Smith and Wendy Kelly, who have been active in working on the data retention proposal, proved extremely reluctant to release any information about the proposal, in public hearings held by the Senate’s Environment and Communications Committee.

Ludlam told the public servant and her colleague that it was clear their project had not been driven from the political level. He appeared amazed at the level of secrecy around the project, noting that to get any information about it, a Senate inquiry had to be initiated, and the media had to put in freedom of information requests. “Rumours flourish in a vacuum, and you’ve created a vacuum,” he said. “If you don’t trust us to tell us what it is you’re doing,” he added, “why should we trust you to do it?”

In addition, from January through May 2012, Delimiter sought information on the proposal under Freedom of Information laws, specifically targeting information held by senior AGD bureaucrats such as Smith, assistant secretary of AGD’s Telecommunications and Surveillance Law Branch, and Kelly, director of the same branch. In general, the department has consistently signalled that there was too much information on the issue of data retention as a whole to easily be able to respond to the wide-ranging FoI requests which Delimiter had filed, seeking to ascertain what the Government is actually proposing with the scheme.

And then, suddenly, in May, the proposal was released as part of the wide-ranging tranche of new surveillance powers currently being debated by the Joint Parliamentary Committee on Intelligence and Security.

Newton noted in his submission to the committee that from his position as a regular citizen, it seemed as though very little of Australia’s national security apparatus was controlled by rationality. “It’s mostly controlled by fear: We pay people in ASIO, ASIS, and other acronym-laden organizations to dream up awful scenarios and play, “What if?” games with them, and the end result is that we have a National Security policy that’s dominated by whomever has the most pathologically overactive imagination,” he wrote.

“We’re in an era where violent crime is at its lowest rate in Australia since the second world war. The worst example of terrorism in Australia which ASIO can muster is a collection of mentally disturbed wanna-be’s prosecuted over four years ago. Australian organized crime seems like a big deal, but only if you leave your skepticism at the door.”

“We’re a fundamentally safe country: Politically stable, prosperous, confident. The kind of place where a house break-in still makes the nightly news, because break-ins are so rare that they’re newsworthy. There is no better time than the present to start reassessing the nature of the relationship between the polity and the police. Given that we are so safe and so crime-free, do we need to keep giving more and more surveillance powers to law enforcement and intelligence services?”

opinion/analysis
I’ve been dealing with the Federal Attorney-General’s Department consistently now for several years, and peripherally before that, and I have to say that there is a great deal of evidence that Newton’s argument in his submission to the Joint Parliamentary Committee on Intelligence and Security that each current Attorney-General is manipulated by their department is correct.

The data retention proposal currently being debated by Australia’s politicians and commentators does not really have anything to do with Roxon. It dates back to before Roxon was appointed, and likely even before her predecessor Robert McClelland was appointed when Kevin Rudd won Government in November 2007.

It seems that the proposal originated in talks between the Australian Federal Police, which has consistently pushed for more powers in this area, and the Attorney-General’s Department, which has largely supported pushes by the AFP and other law enforcement and security agencies such as ASIO for greater access to telecommunications data. In the mix has been Australia’s ISPs and telcos, who are typically involved in these kinds of discussions only under Non-Disclosure Agreements.

It is accurate to say that the Attorney-General’s Department is the organisation behind these proposals — not the current or even the former Attorney-General. Nicola Roxon simply does not understand the gravity of the proposal she has put forward — because it was largely handed to her as a fait accompli deal between law enforcement agencies and the Government.

This is a very sad state of affairs. Neither Catherina Smith, nor Wendy Kelly (from the Attorney-General’s Department) were elected by Australian voters. Neither was the AFP’s top cybercrime cop Neil Gaughan. And yet it appears that it is these kinds of bureaucrats who are primarily setting policy frameworks in this area. Like Newton, I find this to be a most undemocratic and disturbing situation.