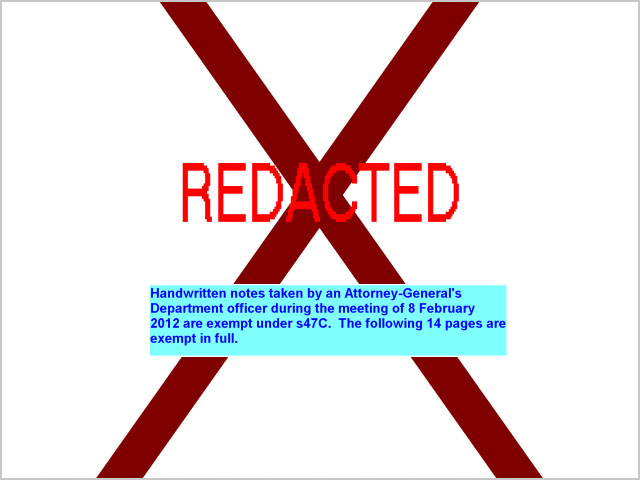 news An internal Government review has backed a decision by the Federal Attorney-General’s Department to censor almost all information about the secret Internet piracy meetings the department has held with the content and ISP industries over the past six months.

Over the past six months, the Federal Attorney-General’s Department has been hosting a series of closed door meetings between the content industries, represented by groups such as the Australian Federation Against Copyright Theft, and Internet service providers such as iiNet and Telstra. The meetings have also been attended by industry groups such as the Communications Alliance, although consumer groups have been explicitly barred from attending.

Earlier this year, Delimiter filed a Freedom of Information request seeking details of the latest meeting, held in February, seeking details such as a list of attendees, notes taken by any government staff, a copy of documentation issued to attendees, email correspondence related to the calling and conduct of the meeting, and internal departmental correspondence regarding it.

However, the Government subsequently used a variety of complex legal justifications to avoid releasing virtually any detail of the meeting under FoI laws. Subsequently, Delimiter appealed the decision and requested an internal review of the Attorney-General’s Department’s justifications. In addition, the Greens have filed a Senator order requesting the documents be produced, although that motion will not be voted upon until May.

This afternoon, the Attorney-General’s Department has made public the results of its internal review. The department’s director of its FOI and Privacy Section, Malcolm Bennett, wrote in a letter to Delimiter that he backed the initial decision to censor the piracy meeting material from being made public. “I have, in short, decided to affirm [AGD senior legal officer Jane Purcell]’s decision to exempt all the notes in full pursuant to section 47C of the Freedom of Information Act,” wrote Bennett.

One of the main legal instruments used to deny the initial release of information was section 47C of the FoI Act, which exempts material from being disclosed if it would disclose material which was involved in the deliberative or consultative processes of the government. In the previous FOI decision, Purcell had used the section 47C clause to deny the release of 14 pages of notes taken by a departmental staffer at the piracy meeting and another four pages of notes taken by a senior staffer from Communications Minister Stephen Conroy’s department.

“As advised earlier by Ms Purcell, the notes in question record discussions which took place at the meeting about proposed industry solutions to the issue of online copyright infringement,” wrote Bennett. “As also advised by Ms Purcell, such discussions are still ongoing. I have affirmed Ms Purcell’s decision that the meeting notes comprise material recording the substance of consultation and deliberation that has taken place in the course of, and for the purposes of, the deliberative processes involved in the functions of this department.”

Bennett noted, as Purcell also did, that another section of the FoI Act required such material to be disclosed unless doing so would be contrary to the public interest.

“I have decided that disclosure of these documents would be contrary to the public interest,” he said. “My reasons for so concluding are essentially the same as Ms Purcell’s — that is, that the discussions that are taking place are at a delicate and sensitive stage.”

“Disclosure of the details of them at this stage would, in my view, prejudice, hamper and impede those negotiations to an unacceptable degree. I agree with Ms Purcell that such a disclosure would be contrary to the interests of good government — and, by definition, contrary to the public interest.”

In Delimiter’s communication with the Attorney-General’s Department requesting a review of the initial FoI request, we had argued that it seemed unreasonable that the entirety of the 18 pages of notes be redacted.

“I would anticipate that there would be sections of these notes which would be trivial, and the redaction of the entire documents is a rather heavy-handed approach,” we wrote in our email to the department. “A more targeted approach, redacting sensitive portions of those notes only, would seem a more appropriate response to the spirit of a Freedom of Information request, and I note that AGD has taken this redaction approach in other sections of the documents.”

Delimiter also objected to the notion that it was not in the public interest to release the documents in full.

“As demonstrated by the degree of interest in this issue amongst the readership of sites like Delimiter (with many thousands of readers interested in this information), it seems clear that the public is highly interested in gaining more information about this situation,” we wrote. “This is further evidenced by the fact that consumer groups and other ISPs have also requested to join the meetings – but been denied. In addition, I am informed that the issue will also be raised in the Senate this week, further demonstrating that there is a public interest in the documents being released.”

iiNet chief executive Michael Malone has reportedly said that his preference would be to stop participating in the talks held by the Attorney-General’s Department.

Delimiter is currently investigating appealing the decision of the Attorney-General’s Department by having it externally reviewed by the Office of the Australian Information Commissioner.

opinion/analysis
Not in the public interest? Judging by the many thousands of people who read Delimiter’s articles on the iiNet versus AFACT High Court case last week (tens of thousands of people on Delimiter alone), and the fact that the matter has been raised in the Senate, I would say there is a huge amount of “public interest” in what is happening in these secret meetings being held by the Attorney-General’s Department.

I am aware that “in the public interest” does not simply mean “people want to know”. However, especially now that the iiNet High Court case has been finalised, it is of paramount importance that the Australian public knows what is being discussed in these meetings, so that it can its own say on this weighty national issue. These talks should be held in the open, with representatives of consumer groups able to attend. And media outlets such as Delimiter will not stop probing the Attorney-General’s Department on this issue until they are.