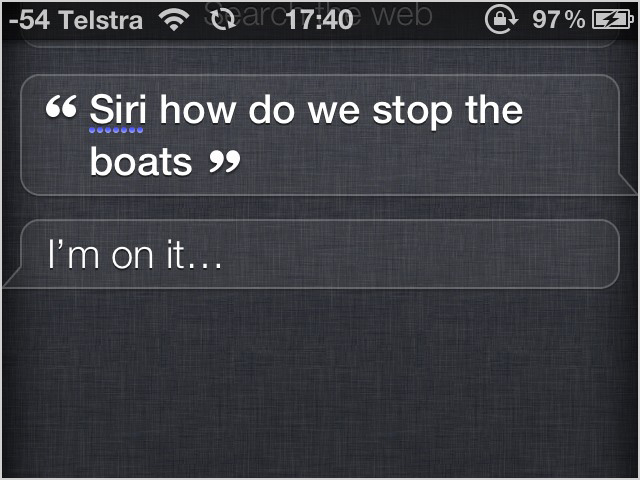 review Following Apple’s presentation of the iPhone 4S a couple of weeks ago, we were pretty impressed at how clever the new Siri technology was. For those that haven’t been lapping up all the iPhone 4S coverage lately, Siri is Apple’s new (well, ‘acquired’ would be more accurate) voice-controlled artificial intelligence technology that’s exclusive to the iPhone 4S.

After using it over the weekend, however, we’re not really feeling the Siri love. In fact, we’re feeling a little gypped. Aussie Siri, as it turns out, isn’t as smart as the American Siri, as it can’t look up local businesses, maps or traffic. This rules out a large portion of Siri’s capabilities; commands like “I’m hungry”, “I’ve run out of petrol” or “my computer is broken”, which should return results for the nearest businesses that can help with those concerns, are met with a “I can only look for businesses in the United States, and when you’re using US English. Sorry about that”.

What’s annoying is that Apple doesn’t make this limitation clear. Its description for Siri on the Australian website is different to the one on the US website in that most of the references to business- or location-related queries have been removed, but some are still there. There’s a reference to “Location Services” that “looks up where you live, where you work and where you are. Then it gives you information and the best options based on your current location”. There’s also a screenshot of Siri returning results based on a query for Italian food, which Aussie Siri isn’t actually capable of doing. Nor are any of these references marked by an asterisk – there’s just a small disclaimer at the bottom of the Siri description page that says “features may vary by area”. What is should say is that businesses, maps and traffic are available in the United States only.

Don’t get us wrong, Siri is more sophisticated than any of the voice recognition technologies baked into other mobile platforms. For a start, it actually understands most of what we say, which is more than we can, er, say for any other voice technology we’ve tried, including Apple’s older Voice Command feature.

Siri’s artificial intelligence comes into play in its ability to translate plain English into actionable requests. You don’t need to use set phrases like you do in other mobile platforms; you can say “what’s the weather going to be like in Sydney on Friday?” or “what’s the forecast in four days time in Sydney”, and it’s smart enough to return the same result for both questions. It can access a variety of built-in apps like Phone, Messages, Reminders, Clock, Mail, Music, Weather and Calendar to do your bidding, and it responds to requests in much the same way that a ‘real’ personal assistant would by replying to requests with phrases like “let me check on that”, and “this might answer your question”, and asking for confirmation before sending text messages and email.

Just like a human personal assistant, Siri can also remember the people you have key relationships with. If you say “Call my girlfriend”, it’ll ask what your girlfriend’s name is, and once you specify that, it’ll ask whether you want it to remember that person as your girlfriend. From then on, any girlfriend-related requests will refer back to that person. But this doesn’t work for all contact databases. Our first setup, which synced Google Contacts to our iPhone through an Exchange setup, didn’t save any of our relationship mapping as the only fields supported were for assistant, spouse and boss; we had to transfer all of our contacts to iCloud before this worked properly.

Our main beef with Siri, apart from the lack of support for local businesses and mapping, is that it doesn’t consistently return useful information, which ultimately means we’re less likely to use it in the future over a standard text web search. Sometimes, it returns a detailed response from WolframAlpha, which usually answers the question (albeit in an overly scientific manner).

More times than that, however, it will return a prompt to search the web (a result we could’ve gotten to sooner by doing a simple web search to start with), or give one of several canned phrases like “Is that so” and “OK”. It’s also programmed to give cheeky responses to specific questions. Ask Siri “what’s the best smartphone”, and it’ll reply, “The one you’re holding”. Other humorous exchanges include:

Q: When does the iPhone 5 come out?
A: Everything you need to know about Apple products is at Apple’s web site

Q: Will you marry me?
A: My End User Licensing Agreement does not cover marriage. My apologies.

Q: What is the meaning of life?

There’s also a new dictation feature into the software keyboard, but this seems to doesn’t seem to be any more accurate than other voice dictation technologies. We dictated the following phrase into an email: “Hi Mark. Can you check whether Andre got that report by the 12pm deadline? If not, I’ll have to see whether the suppliers can push the start date back by a week. Cheers, Arthur.” Siri returned “Hi mom can you check with Andrea got that report by the talking deadline if not I’ll have to say what the supplies to push the stop date back by wake cheese office”. By comparison, speaking the same phrase into an Android smartphone running 2.3.3 returned the following: “hi mark can you check when I get up at 5 o’clock pm deadline is not a good day weather wise got it back by a week cheer up”.

The strange thing is, doing the same thing via Siri, by preceding the phrase with “Send Mark an email”, returned much better results. It opened the Mail app, inputted the following phrase into the body of the email, “Hi Mark can you check weather Andre got that report at 12PM deadline if not I’ll have to see whether the suppliers can push the start date back by week cheers after”, and asked me what the subject of the email should be.

There’s no denying that Siri is extremely clever, and it’ll only get better over time as Apple works out the kinks and improves and expands on the voice recognition capabilities. But is it worth upgrading just for that if you currently own an iPhone 4? We’re voting no. We’ll probably change our minds if/when local business and mapping is supported, but as it stands, it doesn’t offer enough right now to be genuinely useful.