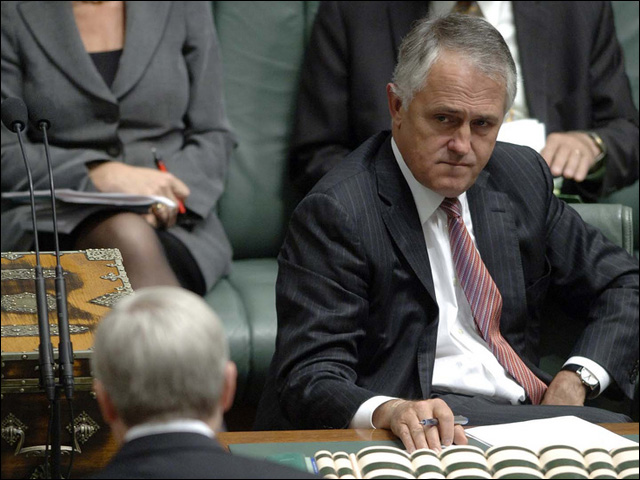 opinion Last week Malcolm Turnbull outlined a telecommunications policy which could become a credible alternative to Labor’s NBN juggernaut. But for all its surface-level attractiveness, the Liberal MP’s vision is far from complete — and unless the holes are plugged quickly, it will die a quick and painful death.

The extent to which Turnbull has not fleshed out his ideas became evident last week during a wide-ranging interview on Sky News, in which a number of News Ltd commentators had the chance to pinion the Earl of Wentworth on diverse matters. After garnering Turnbull’s thoughts on world economics, internal Liberal Party politics, workplace relations laws and more, his questioners (somewhat reluctantly, it seemed) turned their attention to broadband.

Turnbull was given the chance to expansively put his view forth on Labor’s NBN project; and as per normal, he didn’t disappoint.

The NBN was “enormously expensive”, he said, with the Government spending “tens of billions of dollars more … than they need to”. The NBN would “blow out” in cost, perhaps ranging up to between “$60 and $80” billion in total. “Not enough” people would benefit from it, and “there is no application or service” which could use the terabit speeds promised.

Eventually, Turnbull said, there would be “a growing horror” at the money being ploughed into the “massively overcapitalised Government monopoly”, which will see prices go up.

Now, as with many people, I don’t always agree with the approach taken by News Ltd journalists, but in this case, the approach taken by The Australian’s economics editor Michael Stutchbury to Turnbull’s rapidly expanding bubble of hot air was extremely appropriate.”How much cheaper do you claim you will be able to do it under your plan, compared to what the Government is saying?” the redoubtable Stutchbury asked Turnbull.

“Well, the approach we will take –” the Shadow Communications Minister began to reply, before his waffle was cut off at the pass. “In terms of cost to the taxpayer. What’s your estimate?” pushed Stutchbury. Turnbull wouldn’t give a concrete estimate, noting only that “relatively small amounts of Government subsidy” would be required.

“You don’t have a number though,” concluded Stutchbury.

From here on in the interview started to resemble an episode of Yes, Minister, with Turnbull switching sides and playing the role of Sir Humphrey Appleby, rather than his usual position on the other side of the desk as the Right Honourable James Hacker. As Stutchbury doggedly pursued the question of cost, Turnbull continued to duck and weave, giving answers such as “yes and no” and retreating again and again into his safety zone of the cost of Labor’s incumbent NBN approach.

To be honest, it wasn’t one of the best performances in Turnbull’s career; although it did demonstrate the formidable depth of understanding which the former Opposition Leader can boast with regards to costing infrastructure projects — an area in which most of his predecessors in the shadow communications portfolio have demonstrated a lack of knowledge bordering on complete ignorance.

Now one problem for Turnbull, of course, is that it may prove well-nigh-on impossible to actually cost the rival NBN policy he unveiled last week in any reasonable manner.

The public investment figure required to build Labor’s NBN has varied constantly over the past several years, as the Government, then the private sector, then NBN Co itself have estimated just how much money will be required to roll out fibre, wireless and satellite infrastructure around the nation. That amount also changed again when NBN Co and Telstra reached tentative agreement on the terms of their wedding; and no doubt it will change again in future as further construction costs become more apparent.

Turnbull can obviously draw on the substantial resources to cost his proposal — party, public and personal — but with much of its framework unclear (such as the terms of any deal with Telstra), any exercise in doing so will necessarily involve a range of potential future costs.

Compared with the over-analysed NBN, this will leave Communications Minister Stephen Conroy with a thousand avenues of attack to shred Turnbull’s grand vision; a task he has already taken up with relish. Last week — prior to the release of Turnbull’s policy — Conroy issued a series of questions which he demanded the Liberal MP answer. Questions such as:

“Until Mr Turnbull answers basic and fundamental questions about his plan to dismantle the NBN, Australians will be in no position to take the Coalition seriously when it comes to delivering faster, better and affordable broadband,” said Conroy.

As I wrote last week, Turnbull’s plan is 90 percent win. It avoids the anti-competitive move of shutting down the existing HFC networks, allows for the long-awaited separation of Telstra, will support the bush with wireless and satellite and holds the promise of infrastructure-based competition in the telecommunications sector.

However, the proposal is far from complete, and its biggest Achilles heel is Turnbull’s refusal to answer questions about cost. This difficulty leaves Turnbull doubly exposed to Labor criticism on an issue which has traditionally been a Liberal strength: Fiscal responsibility. As Conroy will no doubt shortly begin pointing out, technically the NBN project won’t cost the Government anything. Over the long-term, it will pay for itself with a modest return to the public, courtesy of its commercial model.

Of course, there are other issues with Turnbull’s policy. The difficulty of bringing Telstra to the table for another set of complex negotiations. The need to repeal or modify the tranche of NBN legislation which Labor has introduced over the past several years. The dismantling of a rapidly growing National Broadband Network Company and the justification to the population of a nation half-fibred up and half-not.

All of these discussions constitute land mines which Turnbull has the potential to personally negotiate. But none of them will progress in any meaningful way until the former Opposition Leader is able to put a hard dollar figure on the value of his policy.

Until Turnbull can inject a really hard concrete figure into the public debate, his attractive policy will remain marginalised. For the Member for Wentworth, it’s time to stop discussing his broadband views in public for now and head back to a small briefing room where several dozen economists can work through the details of what they might cost.

Until he does that, his alternative to Labor’s NBN juggernaut will remain ungrounded, unproven and ultimately, undebatable.