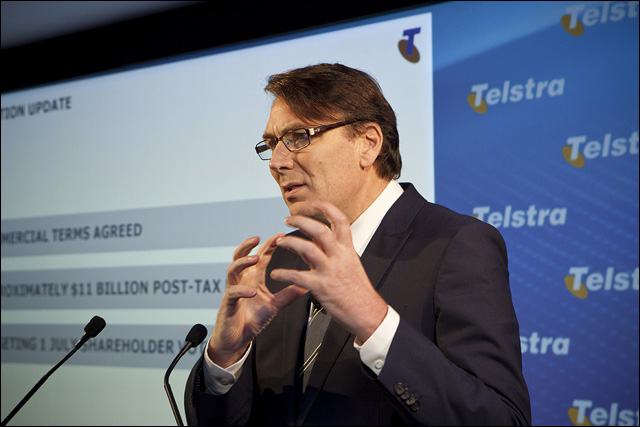 As expected, Telstra this morning revealed it had signed what it described as ‘Definitive Agreements’ with NBN Co and the Federal Government which will make its infrastructure available to the fledgling broadband company and its customers progressively migrated onto the growing NBN fibre network over the next decade, at a cost to NBN Co of $11 billion.

The telco published an extensive statement to the Australian Stock Exchange (PDF) on the matter this morning, as well as a document summarising key aspects of the agreement. Telstra chief executive David Thodey and CFO John Stanhope will take questions from the media in a teleconference this morning.

In her company’s statement, Telstra chairwoman Catherine Livingstone said the deal was still contingent on the approval of a majority of Telstra shareholders, with a vote currently scheduled to be held at Telstra’s annual general meeting in Sydney on 18 October. In addition, the competition regulator will need to approve Telstra’s related structural separation undertaking as well as its customer migration plan.

However, the executive hailed the signing of the agreements as “another important step”, following two years of “complex” negotiations between the trio of parties. “The decision to participate was made on the basis that the proposed transaction is expected to provide us with the ability to recover more value for the business than the available alternatives, given the loss of value after the NBN policy announcements,” said Livingstone.

“After rigorously assessing the options before it, including the regulatory and commercial implications of each, the Telstra Board expects to recommend that shareholders approve a proposal to participate in the NBN rollout, subject to the conditions precedent being satisfied.”

The key components of the deal are as follows:

Telstra will itself incur substantial cash expenditure to support the deal — $0.9 billion in infrastructure and customer migration costs, $0.6 billion on infrastructure maintenance and $0.5 billion on incremental operational expenses. It appears that these costs will mainly be offset by other areas or come from existing Telstra budgets.

The $11 billion value of the deal will not be paid to Telstra in one lump sum — but in amounts over “many years”. The figure is also subject to “a range of dependencies and assumptions over the life of the agreements”.

“These agreements represent an important milestone in addressing much of the uncertainty for Telstra associated with the NBN and Government regulation and allow us to focus intently on our customer service and simplification strategy,” he said this morning. “The Government will achieve its desired industry structure and the arrangements for the USO and associated social obligations will be reformed to ensure that funding for these public interest services is secured.

“Within this new environment, we look forward to continuing to focus on customer service, content and innovation.”

Further coverage to come throughout the day.