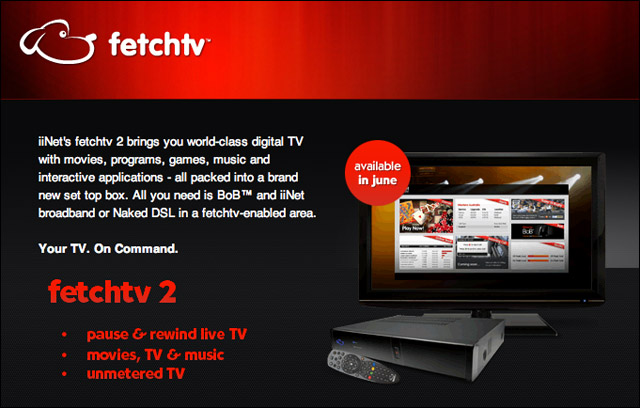 At 11:23pm on Friday night through an email to customers and the launch of a page on its website, national broadband provider iiNet announced some of the pricing and options for its internet television (IPTV) offering, dubbed “fetchtv”.

The product will come in two packages — fetchtv 1 and fetchtv 2 — depending on customers’ broadband speeds, with the lesser one cutting out streaming subscription channels and aimed at customers with broadband speeds between 1.5Mbps and 4.5Mbps or who were not on what iiNet described as “a fetchtv 2-enabled exchange”.

This appears to refer to an exchange connected to iiNet’s own network through dark fibre, as the fetchtv page on iiNet’s site includes a definition of the optic fibre infrastructure. “It’s the infrastructure that helps deliver the type of data required for fetchtv,” the page states. “That’s why this service is only available in particular areas.

fetchtv 2 will be available this month, with fetchtv 1 to launch later on in August. Critically, the fetchtv service for all users will still require customers to be using one of the ISP’s customised BoB integrated ADSL routers (and, of course, be using iiNet broadband).

When asked in an email why this was required, iiNet chief executive Michael Malone said the device had built-in support for quality of service, video and the TR69 standard which allows iiNet to do remote diagnostics and configuration.

“This means all [the] pieces work together: Set-top box, gateway, DLSAMs, core, content network,” said Malone. “I want this to work and the more foreign pieces in the equation, the more chance of failure, and high support load. We’re just not going there. We’ve seen this play out overseas as well, and this is the normal model.”

“Other than the Whirlpool crowd, this is a non-issue. We have 40k units in the field now and selling thousands more each month.”

The fetchtv set-top box is basically an integrated media centre which includes the ability to watch high and standard definition television through three HD tuners and record shows to the device’s 1TB hard disk drive.

Also included in the monthly fetchtv 2 subscription plans are iiNet’s movies on demand, Movie Box, has movie studios Disney, Warner Bros and Village Roadshow on board. Movie Box will have 30 movies available at any given time and a weekly refresh of 7 titles.

Internode, who are also partnered with fetchtv, is yet to announce its IPTV plans.